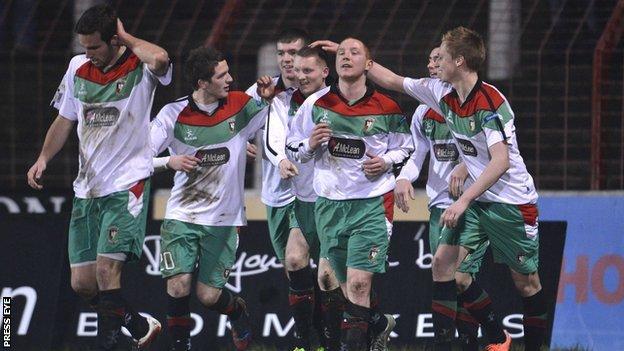 Irish Premiership club Glentoran are in financial trouble again - just weeks after a bailout by their main sponsors.

BBC Sport has learned that the east Belfast club have not paid their tax bill to HM Revenue and Customs for the last three months.

Glentoran's players were paid just half of their January wages on Monday night with February's payments due next week.

The cash crisis at the Oval has led to concerns that some members of staff will be made redundant.

Delays in paying the players and team management have emerged several times this season.

In November, players did not turn up for training over the issue of unpaid wages.

The team's captain Colin Nixon said the players were all worried about the future of the club.

"In tough economic times, everyone is struggling," he said after Monday's Setanta Cup win over St Patrick's Athletic.

"Glentoran are probably more to the fore because we are a bigger club and people want to hear about it unfortunately.

"We will get through it. All the players can do is concentrate on playing. We have to keep plugging away and work hard."