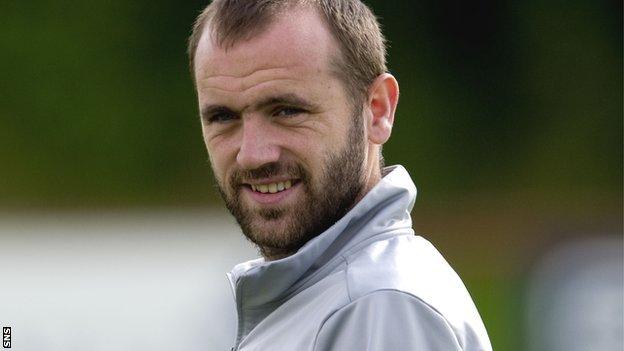 The injury-plagued Scotland favourite, now 29, has rejoined the Steelmen a decade after leaving for Everton.

"I would think it's a really good opportunity for Motherwell," said McLeish.

"What have they got to lose? If they can afford it and James does the business, they've an absolute bargain."

McFadden arrived at Fir Park as a free agent and had been training with the Scottish Premier League side after his short-term deal at Sunderland expired.

If James really goes on fire it might be he sets his sights a little bit higher, in terms of England again

He started his career at Motherwell, scoring 32 times in 70 matches, before moving to Goodison.

McLeish signed him for Birmingham in 2008 but in September 2010 he suffered a cruciate ligament injury and since then he has not played a full match.

But he played just three times for Martin O'Neill's side.

McLeish, who said he had tried to bring McFadden to Nottingham Forest before , said: "It would be great to see James coming to the fore again and giving us the fantastic performances that he has given us in a Scotland jersey.

"He's had a couple of injuries and obviously that has set James back a wee bit in terms of his Premier League status.

"I think James has to go in there [Motherwell] and show everybody he is the James McFadden of old.

"Getting those injuries is very difficult for a footballer, certainly with James's skilful nature, but if there is any guy who is more determined than James then I have yet to meet him."

McLeish, who left Fir Park to become manager at Hibernian in 1998, thinks club and player can benefit from the deal, and did not rule out the possibility of McFadden adding to his 48 caps.

He said: "Motherwell won't be paying huge sums of money for him. They have obviously come to an agreement. It might take them into the European places.

"I don't know what the deal is long term. If James really goes on fire it might be he sets his sights a little bit higher, in terms of England again. Maybe there is an agreement there.

"If he produces the goods for Motherwell, if he shows us that genius and shows that his fitness is fine, then there is absolutely no reason why Scotland wouldn't want a player of James McFadden's technical ability."