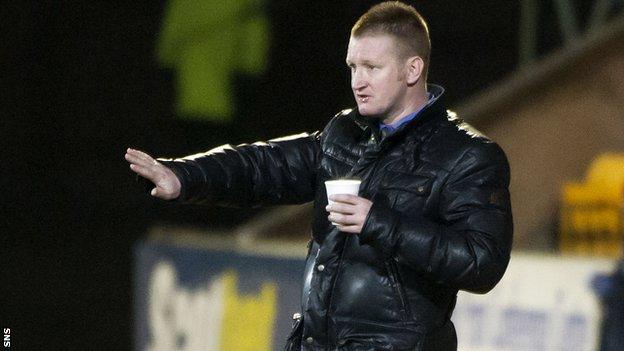 St Johnstone manager Steve Lomas urged Nigel Hasselbaink to make himself a first-team regular after his excellent leveller against Celtic.

The striker came on as a substitute to equalise at McDiarmid Park.

"It's about working in a team shape and doing the ugly side of the game - especially against Celtic."

The wee man's got ability in abundance

He added: "The wee man's got ability in abundance, we're just trying to get it from him more week in, week out.

"It's trying to get him in the mentality that you've got to work without the ball."

The Perth side were fortunate to go in at half-time only one goal behind after Celtic had bombarded Alan Mannus' goal early on.

Mannus denied Gary Hooper on two occasions despite not being able to keep Efe Ambrose's header out.

"We rode our luck first half, there's no two ways about it," Lomas said.

"Some great saves from Alan Mannus and some great blocks.

"Alan's been excellent since he got his opportunity.

"The thing that really stands out about Alan is his professionalism. He waited six months to get an opportunity. He got that opportunity and he's taken it with both hands."

Captain Frazer Wright and Steven MacLean both had headed goals ruled out for offside before Hasselbaink's sixth goal of the season.

And Lomas credited all of his substitutes for bringing about a second half revival.

"We said to the lads to hang in there," explained Lomas

"We put Gregory Tade on to give a wee bit of pace up front and it unsettled them a bit.

"We were able to ruffle a few feathers which we probably didn't do in the first half."

While MacLean's disallowed goal seemed to be the correct call, Wright appeared to be onside when looping his header beyond Fraser Forster.

Wright said: "I just watched it [on television] and I am two yards onside.

"I started outside the box and the Celtic defenders are inside the box.

"But it's a hard job they've [linesmen] got and I don't want to come out and complain about them."