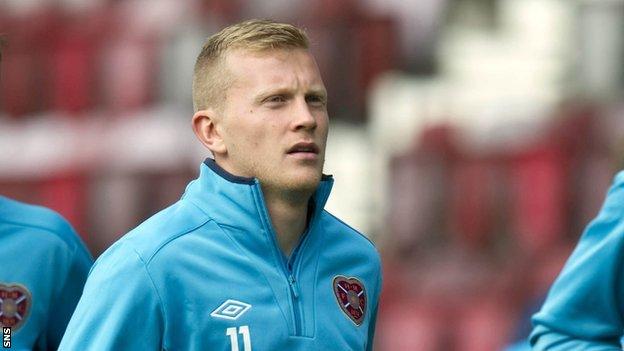 The 25-year-old has joined Major League Soccer outfit Houston Dynamo on loan until his contract with Hearts expires at the end of the season.

Driver came through the youth ranks and played 168 matches for the Jambos.

The player's agent, Scott Fisher, told BBC Scotland: "The deal is done. I spent time in the States with Houston to get the deal pushed through."

A statement on the Hearts website said: "The club wishes Andrew all the best as he continues his career with this fantastic opportunity to play in America."

Driver is one of the highest earners at Tynecastle where a range of cost-cutting measures have been introduced.

He has played without serious injury for a year now after enduring a difficult period when he suffered thigh and knee injuries.

The MLS transfer window is open ahead of the start of the season in the USA.

The former England Under-21 international can play for Scotland under the five-year schooling rule.

Hearts valued Driver at £4m in 2009 when Burnley attempted to sign the player for a second successive summer, while Coventry and FC Twente were also linked with a move for him.

Earlier on Tuesday, Houston Dynamo club president Chris Canetti had confirmed talks were ongoing between the Texas club and Hearts.

And Tynecastle coach Gary Locke had told Hearts TV: "He has been a fantastic lad to work with but we are not 100% sure what's happening at the moment.