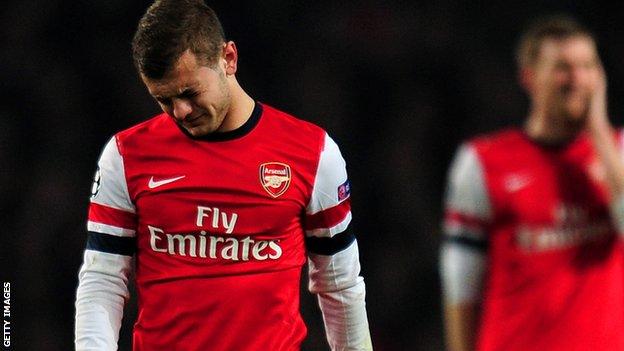 The Gunners' hopes of reaching the Champions League quarter-finals were hit by a 3-1 loss to Bayern Munich at Emirates Stadium on Tuesday.

"The wider and more painful truth is even starker for Wenger after the runaway Bundesliga leaders spent 90 minutes plus stoppage time illustrating to The Emirates what Arsenal have become; how far they have fallen in European terms."

Wilshere said: "The boss has been here for 16 years and he's been doing a great job so you can't question him."

Arsenal are fifth in the Premier League, four points behind Tottenham, who occupy the last Champions League qualifying spot.

The Champions League is the Gunners' only chance of claiming a trophy this season, as they are 21 points behind Premier League leaders Manchester United and were also knocked out of the Capital One Cup in the quarter-finals by League Two side Bradford.

But Wilshere told ITV Sport the players have to turn things around.

He said: "A manager can put us on the pitch and motivate us but we have to do it when we're on the pitch. But we're starting badly and getting punished for it.

"I think the players will take responsibility, we're man enough to take it."

Wenger has refused to give up on his team's Champions League hopes - despite seeing his side comfortably beaten by Bundesliga leaders Bayern Munich.

However, the Arsenal boss admitted the Gunners may have an easier task qualifying for next year's Champions League than staying in this season's tournament.

"Let's not hide the truth," said Wenger. "It will be extremely difficult against a team of their quality. We have to give our best in Germany and hope things go for us.

Premier League: Arsenal are 21 points behind the leaders Manchester United and four points behind north London rivals Tottenham in fourth.

FA Cup: Knocked out in the last 16 after a 1-0 defeat against Championship Blackburn Rovers.

Capital One Cup: Knocked out at the quarter-final stage after a 3-2 defeat on penalties against League Two side Bradford.

Champions League: Reached the last 16, but a 3-1 home defeat by Bayern Munich leaves them with a battle to progress.

"We have two battles and maybe the easier battle will be to be back in the Champions League next season, but we have to give absolutely everything and try to change things in the second leg."

Toni Kroos and Thomas Mueller gave Bayern control with two early goals, Lukas Podolski pulled a goal back for Arsenal but Mario Mandzukic's scrambled third left the Gunners needing a big win in the second leg in Munich on 13 March.

Wenger added: "We played against a very good team who took advantage of every opportunity they created in the first half. We were a bit nervous, Bayern were full of confidence and we paid for it.

"When we got it back to 2-1 it looked like we could make it 2-2. But once they made it 3-1 it looked like Bayern could get another goal because we didn't keep our structure and the last 10 minutes were very difficult.

"We had a good response in the second half and the players gave absolutely everything. They came up against a team that had no doubts at all.

"They have a history in the last six months where everything is positive. You could see every one of their players was confident to play at full power and confidence - it is not our case at the moment.

"But things sometimes change quickly in three weeks so let's hope we can do it."