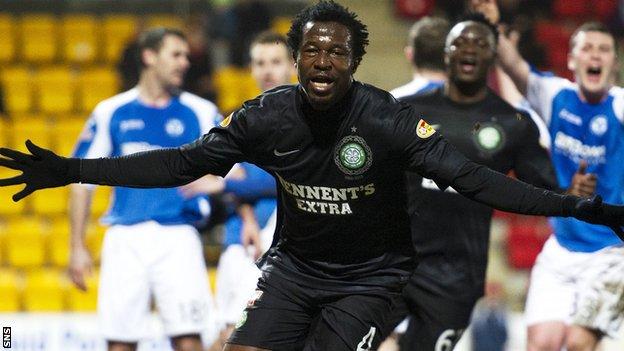 Manager Neil Lennon thought St Johnstone were fortunate to avoid a heavy defeat from his Celtic side at McDiarmid Park.

"I don't think the scoreline reflects the performance," he told BBC Radio Scotland after the 1-1 draw in Perth.

"The first half was the best football I've seen here in my time as a manager; we were absolutely magnificent.

And Efe Ambrose headed the visitors in front eight minutes before the interval.

The Perth side gave a much better account of themselves after the break and had the ball in the net twice through Steven MacLean and then Frazer Wright, only to see both efforts ruled out for offside.

But, with eight minutes remaining, substitute Nigel Hasselbaink curled a fantastic shot past Fraser Forster to level the game.

"We were awesome on a glue pot of a pitch," added Lennon. "The football was fantastic. We looked a real quality side.

"But if you don't take your chances it gives teams encouragement.

"St Johnstone had a go in the second half and we didn't handle the physical side of it.

"We faded a bit and got caught by a sucker punch.

"We just slackened off a bit, got a bit too deep and Thomas Rogne slipped for the goal.

"I thought we were comfortable without being brilliant in the second half."

The man-of-the-match award went to Mannus, who also made a smart stop to keep out a deflected effort from Charlie Mulgrew late in the game.

"Of course it was," said Lennon of the decision. "It couldn't have been anybody else!

"If I'm being philosophical, it's a point away from home and, overall, I've got to be pleased with the way we played."