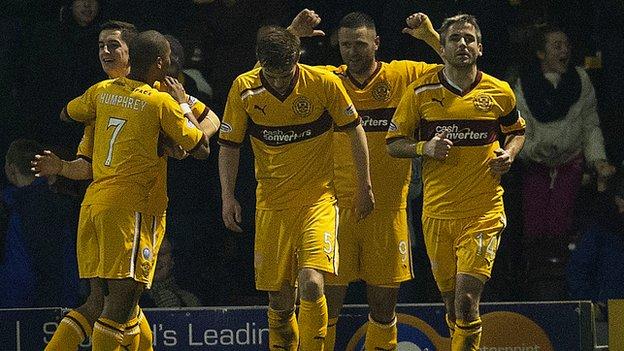 Michael Higdon's 19th goal of the season saw Motherwell topple Celtic at Fir Park and move back into second place in the Scottish Premier League.

Chris Humphrey slammed in a close-range shot on 31 minutes, following up a Nicky Law strike.

Celtic levelled with a Georgios Samaras header midway through the second half.

But the runaway leaders slipped to their fifth defeat of the season when Higdon arrived at the back post to volley home on 73 minutes.

James McFadden made his first start since returning to Motherwell as Stuart McCall's side looked to bounce back from consecutive league defeats.

There was a buzz around Fir Park every time McFadden touched the ball in a bright opening spell for the hosts.

However, Law, who curled an early free-kick wide, was the pick of the bunch for Stuart McCall's side, setting up both goals.

As Motherwell hunted in packs and worked really hard to press the ball, Celtic had no time to settle and the visitors lacked fluency in the first 45 minutes.

With top scorer Gary Hooper among the substitutes, Anthony Stokes was left isolated up front and the only scare for home keeper Darren Randolph came from one of his own players.

On 27 minutes, James Forrest drilled a low cross into the penalty box and Shaun Hutchinson mistimed his clearance, the ball popping off his standing leg and heading towards the net before Randolph dropped on it.

Four minutes later, the hosts were in front as Law broke forward on the right and jinked his way past an opponent to drill a shot across goal.

The ball was going narrowly wide but Humphrey followed up as the Celtic defence switched off and the winger thumped in a shot at the back post.

Some 58 minutes had passed before Celtic managed a shot on target.

Kris Commons fashioned room for a curling strike from 18 yards but the midfielder's effort lacked power and Randolph gathered with ease.

Celtic then broke at pace from defending a corner and a chipped pass from Stokes sent Commons scurrying into the penalty area, but Randolph did well to advance and force him wide to break down a promising attack.

Stokes again demonstrated good vision to release Forrest on the right and the winger's cross produced the equaliser, with Samaras getting to the ball ahead of Hutchinson and Randolph to nod in at the near post.

Celtic were doing most of the pressing but the home side took advantage of some sloppy defending at a throw-in to move ahead for a second time.

Law dashed in behind the visiting defence and checked past Efe Ambrose before standing up a lovely cross to the back post where Higdon was arriving to blast in a volley from six yards.

Randolph made a great close-range block to deny Joe Ledley, who had run on to a teasing low delivery from fellow substitute Hooper.

Commons then got on the end of another cross from Forrest but his header was straight at the increasingly busy Randolph.

The Celtic attacks kept coming and Randolph had to smother a dangerous shot from Forrest before Adam Cummins did well to block a Samaras header in a congested six-yard box.

Neil Lennon's men continued to hurtle forward in stoppage time but Motherwell held firm to edge one point ahead of Inverness Caley Thistle.