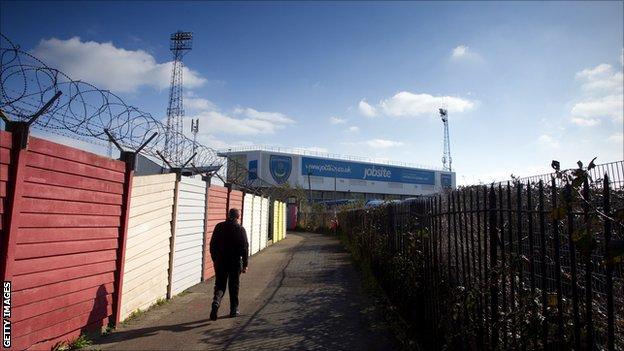 Property developer Stuart Robinson, who is working with the Pompey Supporters' Trust (PST), has bought the land surrounding Fratton Park.

The land is seen as vital to the club's future, with Robinson and the PST also hoping to buy Fratton Park stadium.

That loan will help the Trust fund a joint-purchase with Robinson of Fratton Park - which can now be reunited with land surrounding the ground.

The land is almost 10 acres of car park and office space to the north and west of the stadium and is seen as pivotal to the club's future as it would finally allow Fratton Park to be developed. It is understood Robinson paid close to £4m for the land.

The area had been owned by Miland Development 2004 Ltd but was put up for sale after it went into administration.

It was initially bought by former owner Milan Mandaric in 2004 and 2005, and then passed to the club's next proprietor, Gaydamak.

The London-based French-Israeli businessman held on to the land as security for money he claims he was owed by the club until he also placed Miland into administration last year.

But the land is deemed to be practically worthless without control of Fratton Park, as Portsmouth City Council will not grant planning permission for anything on the site unless Pompey's existing stadium is upgraded or they get a new arena elsewhere.

However, if the PST can take control of the club and Fratton Park, they can then forge ahead with a complete redevelopment of the site.

Former owner Balram Chainrai claims he is owed £12m by the club and holds the stadium as security through his company Portpin via a fixed charge.

The PST have offered him £3m for the ground but he has refused to sell. Club administrator Trevor Birch is currently in the process of going to the High Court to ask for Chainrai's fixed charge to be released - which would then force him to sell at the market rate.