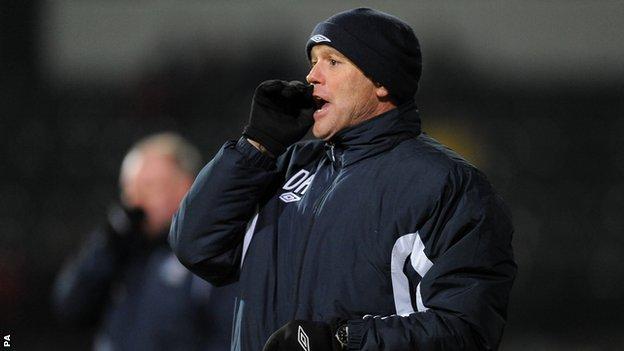 Forest Green Rovers manager Dave Hockaday has dismissed rumours that he could fill the vacant managerial post at Swindon Town.

Paolo Di Canio resigned on Monday and Hockaday was quickly installed as one of the front-runners to replace him.

The 55-year-old made more than 300 appearances in seven years as a player at the County Ground between 1983-90.

"I haven't been approached. I'm employed by Forest Green Rovers and I love my job," he said.

"I've got the best chairman in the world so I'm not going to go looking for another job."

Hockaday took charge at The New Lawn in September 2009 and after avoiding relegation in his first full season courtesy of Salisbury City's financial irregularities, he led Rovers to a 10th place finish in the Blue Square Bet Premier last year.

They now sit fourth in the table, just five points off top spot.

"I've got a great group of lads here and we're building something special," he told BBC Radio Gloucestershire.

"I'm Forest Green through and through. If ever my chairman wants me to leave then that's a different matter but until such time I'm happy here."