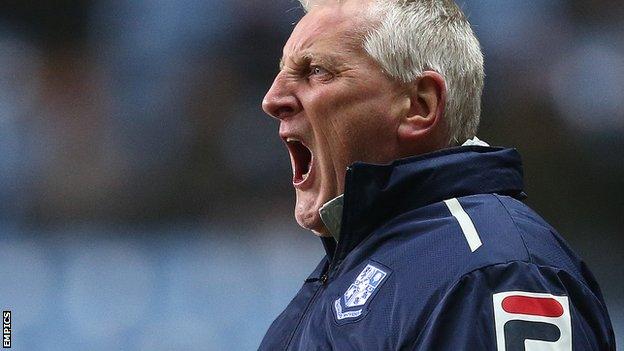 Seven of the team that established Rovers at the top of the table early in the season were missing as to reach the summit themselves.

"Where we are is basically down to those seven lads," boss Moore told BBC Radio Merseyside after the 3-1 defeat.

After seeing his side slip to sixth, Moore continued: "We've lost the game because we've made silly wrong decisions.

"One or two in the crowd were having a go and you can understand why, but what they've got to realise is the team that played is seven players short of what the team has been. We can't carry 20 players who have all got the same ability."

Loanees Jake Cassidy and Ben Gibson both returned to their parent clubs in January, while suspensions and injuries have robbed Rovers of influential players such as captain James Wallace in recent weeks.

And Moore added that the loss to Swindon was a perfect example of his point.

"They've got quality players and that's why they're top of the league," he said. "We've got workhorses and people who have a good go.

"When we've got our best 11 in, we're a match for anybody, but at the moment we haven't got that."

Moore is hopeful that centre-back Gibson, 20, will return to the club on loan before the trip to Colchester on Saturday.