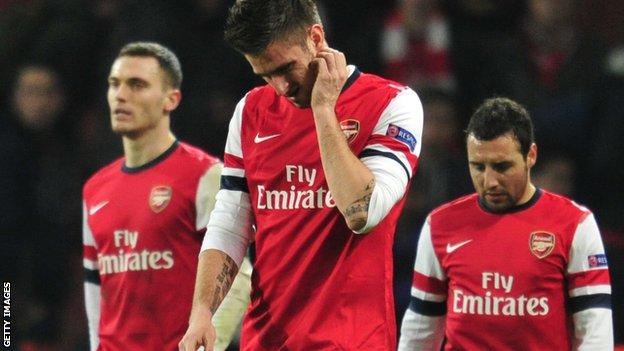 Arsenal captain Thomas Vermaelen says he is stunned by suggestions that manager Arsene Wenger should be sacked.

Pressure is mounting on Wenger after Arsenal lost 3-1 to Bayern Munich in the first leg of their Champions League last-16 tie at the Emirates on Tuesday.

"Arsene Wenger is facing greater scrutiny than at any point in his 16-year reign. But I'm told the Gunners have absolutely no intention of sacking him - regardless of whether they qualify for next season's Champions League.

"Wenger is contracted until 2014 and while we do not know how long he plans to remain in charge, increased TV revenue and a new shirt sponsorship deal mean significant funds are available to him this summer. With the likes of Arshavin, Squillaci, Chamakh and Bendtner set to leave, finances and squad places will be freed up for a number of signings. January's pursuit of David Villa shows Arsenal are ready to spend big.

"There will be no return for former chief executive David Dein, and do not expect to hear from owner Stan Kroenke, but Arsenal believe they are putting pieces in place to compete with Europe's biggest clubs in the near future. They accept the move from Highbury to Emirates Stadium - allied to the way cash-rich clubs like Chelsea and Manchester City have transformed football's landscape - has hampered progress. The hierarchy argue, however, that short-term pain will make way for long-term gain."

This followed a 1-0 home loss to Championship Blackburn in the FA Cup.

Asked if he was shocked Wenger's future is being questioned, Vermaelen said: "I am actually. Everyone in football looks too short term."

He added: "They don't look at the long term and he's done a lot for this club. He is the right man for this club and we are all behind him."

Winger Theo Walcott said: "We've got the best man in the job to get our heads back to where they should be. I've played a lot of games in the Champions League and I know how things go.

"We need to react in a positive way straight away. We can't be down in the dumps in training. Everybody needs to be alive and alert, recover well."

With an uphill battle to qualify for the Champions League quarter-finals, Arsenal are now facing the possibility of an eighth successive season without a trophy.

They are 21 points behind leaders Manchester United in the Premier League and were knocked out of the Capital One Cup by League Two Bradford at the quarter-final stage.

But it is understood senior figures at Arsenal have no intention of sacking their 63-year-old manager - even if they fail to qualify for next season's Champions League.

On Monday Wenger became angry at a news conference over a report he would be offered a new contract, claiming it intended "to harm".

Following the defeat by Bayern Munich, some newspapers suggested that Wenger should consider his position.

But Arsenal midfielder Jack Wilshere said that Wenger was not to blame for the team's poor results.

Vermaelen agreed, saying: "We have to show it on the pitch as well. At the moment the results are not good. But we will work hard with him to get the results back."

"It doesn't mean that because it's not going well at the moment we don't stand behind him."

The defender has also asked that the club's fans stay patient despite the poor run of form.

"The fans must not forget that we need them because they belong to the team and to the club," he said.

"Sometimes, as a player, you are frustrated as well. If you lose you get frustrated but it's not the right thing to act on. We have to stick together, work hard. We need each other.

"Of course we are not happy. Don't look at each other, don't blame each other, work hard every day to get the results back."