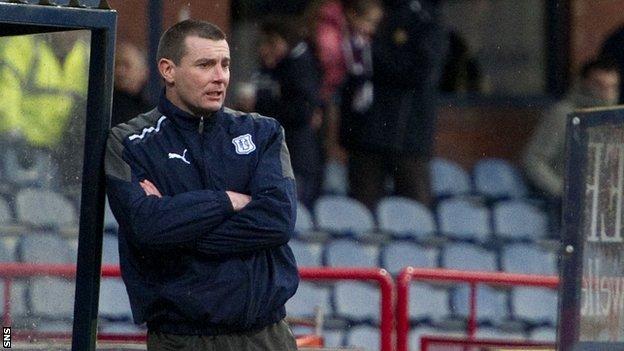 The Tayside side currently sit bottom of the table, 15 points behind 11th-placed St Mirren.

"Dundee FC today announced that they have parted company with manager Barry Smith with immediate effect," said a club statement.

"Until matters regarding this have been formally concluded, no further statement will be made."

Assistant manager Ray Farnigham is expected to organise the team for Sunday's match against Celtic in Glasgow.

Smith took over as Dundee manager in 2010, succeeding Gordon Chisholm after the club entered administration.

Dundee, who finished second in last season's First Division, were admitted to the top flight to take up the place vacated by Rangers, who lost their spot due to financial problems.

There have been only three league victories for Dundee this term, with all of them coming against Edinburgh clubs.

They beat Hearts 1-0 away and at home in September and November, respectively.

Hibernian lost 3-1 when they visited Dens Park in November, but Dundee have not won in the division since.

In the cup competitions, there have been mixed fortunes.

A humbling early Scottish League Cup exit to Third Division side Queen's Park has been contrasted by a good Scottish Cup run.

The Tayside club are in the quarter-finals, where a home tie against city rivals Dundee United awaits them on 3 March.

Chief executive Scot Gardiner told BBC Scotland he had been "inundated" with interest in the manager's post shortly after confirmation of Smith's departure.

"There are two situations," he explained. "There's a possible interim manager that we would appoint and there's also the potential which could be a full blown managerial appointment.

"I've been absolutely swamped with applications direct from managers and their agents."