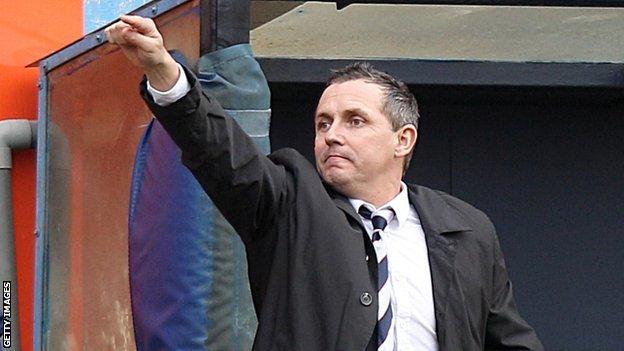 Buckle left for personal reasons on Tuesday, with the Hatters eighth in the Blue Square Bet Premier.

"We weren't happy with our league position. There were discussions about that, of course," Sweet told BBC Three Counties Radio.

"Everybody knows what our objective was this season but we think, long-term, Paul was the right man for the job."

It's not quite as clear as it may otherwise seem to everybody. I'm talking in riddles because it's not a simple situation, it's quite complex

Buckle, 42, was given the task of ending Luton's four-season exile from the Football League but ended up spending less than 12 months in the job.

After Saturday's FA Cup exit to Millwall, the former Torquay United manager had suggested he would be talking to the board about reassessing how the club moves forward.

But Sweet has insisted the Hatters' league form, which sees them 11 points off the Blue Square Bet Premier play-offs, was not the main motivation for Buckle's departure.

"After the game on Saturday we've met several times with Paul, who indicates he's in a position where he needs to leave the club," said Sweet.

"Both he and I and the board feel it's probably the best thing for Luton Town at this stage. Paul's personal situation is quite genuine and we've got to respect that.

"We want stability at the football club. We've tried so hard to get it. It's a tough situation because people won't see the reasons why we're in the position we are in.

"But it's not quite as clear as it may otherwise seem to everybody. I'm talking in riddles because it's not a simple situation, it's quite complex."

Luton will now be looking for their fourth manager in two years, after Richard Money and then Gary Brabin were cast off after failing to win promotion to League Two.

Sweet said he would welcome an application from assistant manager Alan Neilson, who took charge of Tuesday's 1-1 draw at Macclesfield, but added no candidates had been lined up.

"We move on now and find another gaffer," added Sweet. "We've got experience of it and we're meeting on Wednesday to make sure we go through the right process.

"We've got a good squad of players that need picking up and we need to find the right man for this season.

"If that man is right for us in the longer term then all well and good."