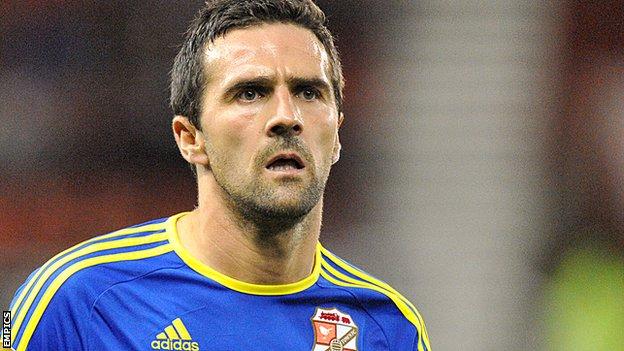 Swindon Town have announced that midfielder Tommy Miller and defender Darren Ward, both 34, will take temporary charge of the club.

Fabrizio Piccareta oversaw Tuesday's 3-1 win over Tranmere, but revealed afterwards that he and the backroom staff would resign the following day.

A statement on the club's website said: "This initiative has the full support of the prospective new owners."

Darren Ward only signed for Swindon permanently in January, having spent the first half of the season on loan from Millwall. Tommy Miller signed in the summer from Huddersfield.

The statement added that the temporary appointment would "allow them the opportunity to assess all of the applications that have been received in relation to the vacant managerial position and take a considered view for the long-term benefit of the club".

Miller arrived at the County Ground from Huddersfield last summer, and has since made 31 appearances for the Robins, scoring once.

The midfielder counts Ipswich, Sunderland and Sheffield Wednesday among his former clubs.

Ward only signed permanently for Swindon in January, having spent the first half of the season on loan from Millwall.

The club also confirmed that a goalkeeping coach and fitness coach will be brought in to assist the duo.

I want to highlight that this achievement, this fantastic team that is top of the league, is because of Paolo Di Canio

The move comes after Piccareta, who had been assistant to previous boss Di Canio, announced on Tuesday that he and a number of the backroom staff were set to follow his fellow Italian in leaving Swindon.

Speaking after the win at Prenton Park, which sent the Robins to the summit of League One, Piccareta added: "This is our last game. This is a great way to say thanks to the supporters.

"We have shown in the last two years that a strong team of people can achieve fantastic things - nobody expected us to take Swindon to the top of League One.

"It's the outcome of the fantastic job of Paolo Di Canio, the players and ourselves as a technical staff.

"I want to highlight that this achievement, this fantastic team that is top of the league is because of Paolo Di Canio.

Miller and Ward's first game in charge will be at home to Preston North End on Saturday.