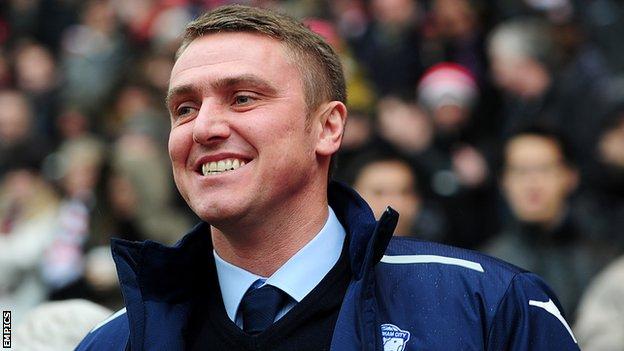 Birmingham City manager Lee Clark said he was pleased with the response after his much-changed side was held by fellow-strugglers Sheffield Wednesday.

Clark made five changes for the match against the Owls, including bringing back striker Nikola Zigic.

Clark had previously dropped the tall Serbian after criticising his attitude during training.

Clark told BBC WM: "The strikers worked extremely hard and that set the tempo for the rest of the group."

He's a top, top goalkeeper and I'm just thankful we have him until the end of the season

He continued: "Without a doubt we're still looking over our shoulder, but the bottom half of the table is so tight. If we could put two wins together we could jump right up the table.

"That's one defeat in seven now, and changing a couple of draws into wins would have made a massive difference, but we go into our next game against Peterborough in good heart, looking to keep our mini-run going.

"The personnel we put out, we had to make sure we competed, that we were strong and aggressive against a big powerful team, and I think we did that.

"We played high tempo football and with just a little more belief, could have got all three points."

Clark singled out a first-half save by goalkeeper Jack Butland from Wednesday defender Miguel Llera for particular praise.

"It was absolutely sensational," he said. "You run out of things to say about him [Butland], he's a top, top goalkeeper and I'm just thankful we have him until the end of the season."