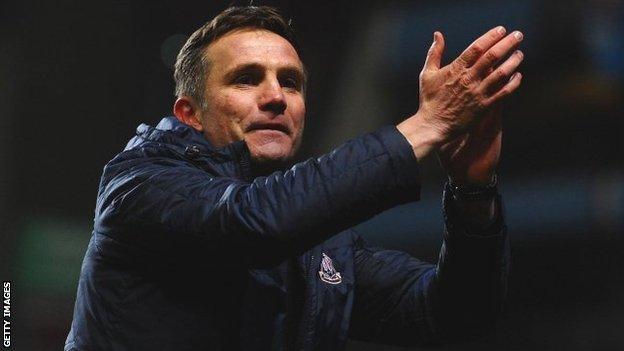 Bradford City joint-chairman Mark Lawn says the club want to keep manager Phil Parkinson but are "realistic" about the possibility of him moving on.

Parkinson is out of contract at the end of the season and has led the League Two club to the Capital One Cup final.

The 43-year-old turned down the chance to speak to Blackpool about their managerial vacancy last month.

"We want Phil to stay but we have to be realistic, we're a fourth division side," he told BBC Radio Leeds.

"As long as we can afford him then we want him here but if someone comes along from the Championship or Premier League then we can't compete with that.

"Even if he has got a contract that won't stop other clubs from approaching him.

"His agent has been a bit tied up of late and we were busy before then so it has been difficult to get together but we are trying to do that.

"He's told us that he wants to be here and we want him and his managerial team to stay with the club."

Parkinson took over at Valley Parade in August 2011 after the departure of Peter Jackson and led them to 18th place last season.

The Bantams, who are currently 11th in League Two, take on Swansea in Sunday's League Cup final at Wembley.