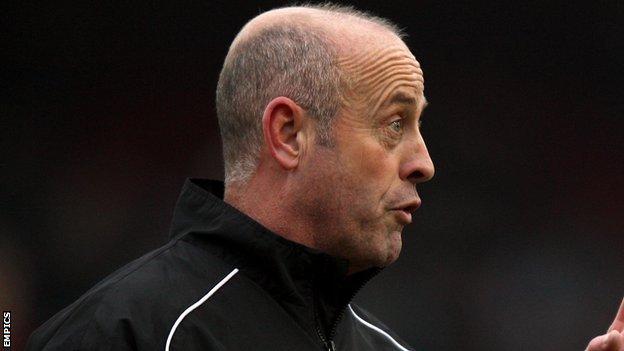 Hereford United manager Martin Foyle has admitted he is concerned that his small squad is struggling to cope with the fixture congestion facing the club.

United lost 1-0 at Ebbsfleet, who started the game bottom of the Blue Square Bet Premier, on Tuesday night.

We got straight off the coach and played a football match, which isn't really the right preparation

Foyle told BBC Hereford and Worcester: "We're playing catch-up on what is probably a ridiculous amount of fixtures for the size of the squad.

"We can't chop and change, and we're finding it hard at the moment."

The Hereford squad did not stay overnight either before or after the game at Ebbsfleet, a 400-mile round trip.

"We got straight off the coach and played a football match, which isn't really the right preparation, but I'm not using that as an excuse, we certainly didn't look sharp," said Foyle.

"I'm disappointed we were probably a yard off the pace, but credit to Ebbsfleet, they were the better side, they certainly out-muscled us and probably out-fought us in most areas.

"Fair play to them, they looked strong.

"How they're bottom is hard to understand, they've obviously brought in four or five (new players) over the last couple of weeks. They have the resources to do that. We must keep going on with the same squad."

He added: "Now we have another away game at Cambridge, a decent side, and we have to make sure we're right, we rest up right, but the games are coming thick and fast, Saturday and Tuesday, and we haven't got a break after all the games were called off."