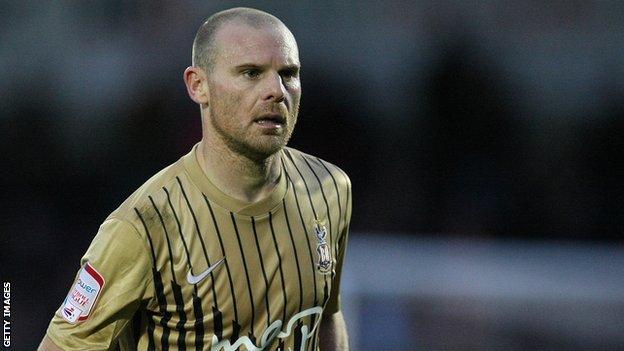 Bradford City captain Gary Jones hopes to deny the club that gave him his route into professional football in Sunday's Capital One Cup Final.

Birkenhead-born Jones was given his break in the Football League by Swansea City in 1997.

Jones made only eight appearances in a short spell at Swansea, but worked under three managers - Jan Molby, Micky Adams and Alan Cork - during his time there.

Much has changed for Jones and Swansea since then but the 35-year-old will be forever grateful to the Welsh club for giving him his chance in the professional game.

"Jan Molby signed me many years ago now and I'm very grateful for them for giving me my first professional contract," Jones told BBC Wales Sport.

"I wasn't there that long - I got shipped out to Rochdale on loan. Alan Cork released me after Micky Adams' two weeks in charge.

"It was disappointing but I'm grateful that they gave me my start in professional football. All things happen for a reason and obviously that's what happened.

"Obviously it was the old fashioned ground with the fans on the pitch virtually. It is a million miles from where they play now.

"A lot of credit has got to go to them because of what they've achieved.

"They were in a position we are now so it just shows you what can be done with the right management, chairman and right backing.

"Hopefully we can take a leaf out of their book so we can be where they are in a few years' time."

Jones' loan spell with Rochdale was eventually made permanent and he spent 11 years in total at Spotland, making 531 appearances and scoring 80 goals.

But the short spell at Swansea is not his only link with Welsh football.

After being rejected as a youngster by local club Tranmere, Jones played for teams on Merseyside before he was signed by Caernarfon Town.

And Jones says his time playing in the League of Wales helped him achieved his ambition of making it as a professional, when he was signed by Molby.

"There was a lot of travelling going to Barry, Cwmbran and Caersws," recalls Jones of his time with the Canaries.

"I quite enjoyed it at the time obviously because you were getting a bit of money for it and I was working too with my dad.

"You've got to start somewhere and that was my grounding and I think I'm the person I am today because I've had that grounding in football."

Jones left Rochdale to join Bradford last summer and is now preparing to lead the League Two side out at Wembley in the Capital One Cup Final.

Of the opponents he is likely to face on Sunday, Jones names midfielder Leon Britton as the Swansea player he most admires.

"He's been at the club since the dark days," Jones says of a player who joined then Third Division Swansea in 2002.

"He's played in every division and he's a fantastic footballer. A lot of credit goes to him [and] it just shows you what can be done if you play a settled team every week.

"I really admire him and I'm looking forward to locking horns with him."