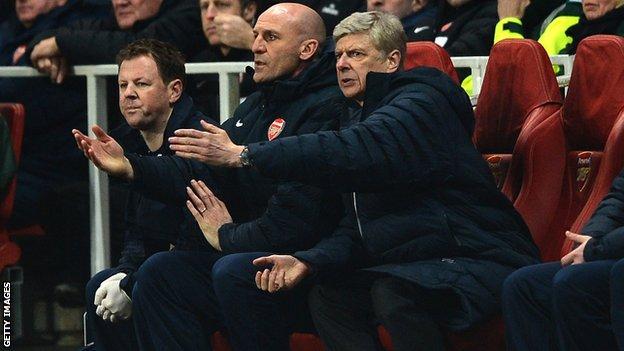 Arsene Wenger will attend Arsenal's monthly board meeting on Thursday but his future is not on the agenda.

It is understood the club have no intention of sacking Wenger, even if they fail to qualify for next season's Champions League.

The manager retains the unequivocal support of majority shareholder Stan Kroenke and his fellow directors.

Kroenke was at Tuesday's Champions League defeat by Bayern Munich and will also be at the board meeting in London.

Any decision over Wenger's future rests with the Frenchman himself - he is under contract until 2014 and Arsenal would be prepared to offer him a new deal if he wants to extend a reign that began in 1996.

There will be no out-of-the-ordinary show of support at the board meeting because the support is already there - Wenger and the board are united and agreed on what they are trying to achieve and what needs to be done to get there.

They recognise the shortcomings of the team and understand the concern of Arsenal supporters, but the club are adamant they are putting the structures in place to compete with Europe's biggest teams in the near future.

Arsenal are facing a battle to qualify for next season's Champions League. They sit fifth in the Premier League, four points adrift of the final qualification spot, which is currently occupied by neighbours Tottenham.

They have not won a trophy since beating Manchester United on penalties to lift the FA Cup in 2005, and hopes of silverware this season have all but disappeared.

Wenger's side were knocked out of the Capital One Cup by League Two side Bradford in December and suffered a home defeat by Blackburn in the FA Cup fifth round on Saturday.

Their chances of reaching the Champions League quarter-finals were severely dented with the 3-1 last-16 first-leg loss to Bayern.

Arsenal's move from Highbury to Emirates Stadium in 2006 restricted their spending power - and they did not anticipate the impact that cash-rich clubs such as Chelsea and Manchester City would have on football's markets.

But the first instalment of a new shirt sponsorship deal will contribute to a fund of around £70m for new signings this summer.

The club will be boosted by which will give each club around an extra £30m per season from this summer.

They are expected to move on a number of fringe players to free up money for new signings, with Andrey Arshavin and Sebastien Squillaci out of contract at the end of the season and Marouane Chamakh and Nicklas Bendtner also likely to leave.

Arsenal's pursuit of Barcelona striker David Villa in the January transfer window - which came to nothing because the Catalan club refused to sell - indicates they are ready to spend significantly.

The Gunners hierarchy are confident they have the resources to attract top-quality signings even if they miss out on next season's Champions League, although accept that would make the task harder.