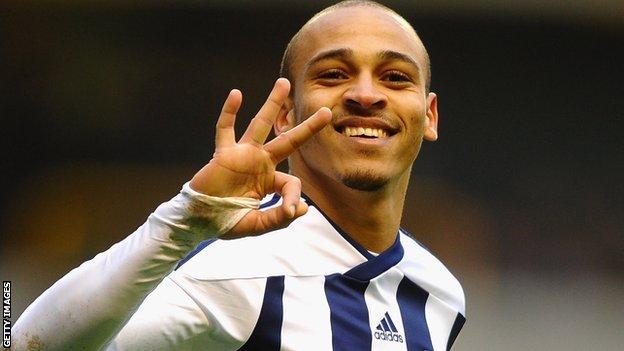 West Brom manager Steve Clarke does not want fans to let their feelings towards striker Peter Odemwingie affect their support for the team.

Odemwingie, 31, has fallen out of favour since his failed attempt to join QPR on transfer deadline day.

But Clarke says the Nigeria striker is part of his plans for Saturday's home clash with Sunderland.

"I understand some of the supporters might not want to forgive Peter quickly," Clarke said.

"But all I ask is they support the team. If Peter scores a hat-trick and they choose not to celebrate Peter's goals, they should celebrate the fact that the team have scored.

"All we can ask is that the supporters support the team and don't allow their feelings over one player to override the fact that the support has been great this year, home and away."

After a month of speculation over a move to QPR, Odemwingie made headlines on deadline day when, despite his transfer request being rejected and the two clubs not having agreed a fee, he turned up at Loftus Road.

Odemwingie at the Albion

The Uzbekistan-born Nigeria international, who joined the Baggies in August 2010 from Lokomotiv Moscow for an undisclosed fee, has scored 31 goals in 83 games

He reported to Albion's Walsall Road training ground the day after his unauthorised trip to west London, but was told to return the following week and has since accepted a fine of two weeks' wages.

The Nigerian was told last week that he still has a part to play this season and was welcomed back into the Albion dressing room.

This week, Clarke admitted that the club's shortage of players meant Odemwingie would feature again this season.

He said: "We've had a couple of little chats but nothing in depth and he knows the situation.

"He knows he needs to work hard and he has to be ready for his opportunity when it comes and, for sure, it will come, because we only carry a small squad.

"Will he be considered for Saturday? Absolutely. I've got 20 players available and he'll be involved with the 20 players."

Odemwingie, who has scored five Premier League goals this season, has another season left on his contract after the end of the present campaign.

The former Lille player tweeted on Thursday: "As said in my statement, I will make my contribution to the season with full commitment and after the season we choose best for both."