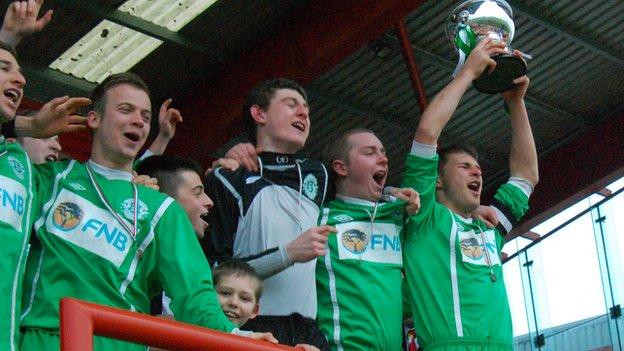 Guernsey held their nerve to beat rivals Jersey 7-6 on sudden-death penalties in the Under-21 Muratti and lift the Ambassadeur Bowl for the first time since 2008.

It remained 1-1 with no further goals in extra-time before both teams struggled in the shoot-out.

Both only managed to net two of their first five penalties.

But when it came to sudden-death the players suddenly seemed to find the ability to score.

Guernsey fired in their next five before Wilson hit the post with Jersey's 10th penalty to spark wild celebrations from the Greens.

"It's a great learning experience for both teams," said Jersey boss Craig Culkin.

"All credit to Guernsey, it was a disappointing way to lose the game but we've won games like this before so it's our turn to be on the receiving end.

"We've got a lot of potential and I can't be too critical of our players."

Jersey had dominated the early stages and the first half in general and Wilson's early goal from close range gave them a deserved lead at the break.

But just seconds after the restart the visitors were level and looked to have greater energy and purpose about their play.

Neither side could find the winner in normal or extra-time, despite the efforts of Jersey defender Tim de la Haye whose header came back off the post.

The match grew in excitement and drama the longer it went on and the fact that even extra-time could not separate the teams was probably a fair reflection on two evenly-matched sides.

"It was a good open game and no one likes penalties but I'm glad we got ourselves home in the end," Guernsey boss Will Woodford told BBC Radio Jersey.

"I'm glad we got the win we deserved. In the first half we were poor and we had a few words at half time and restructured

"The second half we completely dominated, come extra time both teams were tired and it was quite open and quite even."