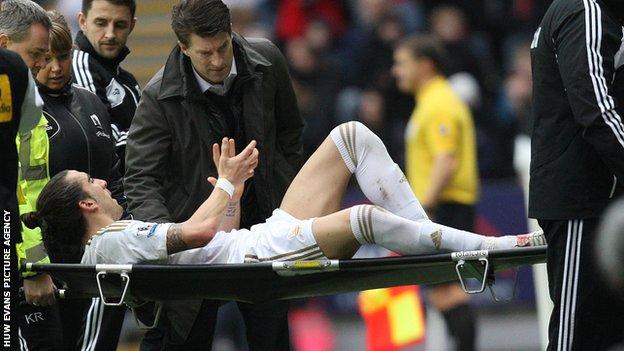 Swansea City defender Chico Flores has been forced to accept defeat in his fight to be fit in time for Sunday's League Cup final against Bradford City.

Flores, 25, said on Thursday morning he still held hope of making the Wembley showpiece, continuing his recovery from injury by training on a local beach.

But Swansea manager Michael Laudrup said he has not recovered from ruptured ankle ligaments to be considered.

"Chico tried a fitness test today, but it is far too early for him," he said.

"I would estimate he will be fit in four to eight weeks. He realised today it is much too soon."

Swansea have also revealed that goalkeeper Gerhard Tremmel will start against Bradford, who are 11th in League Two.

The 34-year-old is second choice to Dutchman Michel Vorm in Premier League games, but has played in each round of the League Cup as Swansea secured their place in the final of one of English football's major cup competitions for the first time in their 100-year history.

Flores, who has established himself as a regular alongside Ashley Williams at centre-back this season, was injured in the 4-1 Premier League win over QPR on 9 February.

His absence would seem to leave Laudrup with a straight choice between Garry Monk and Kyle Bartley to partner Williams at the heart of the Swansea defence.

Club captain Monk, 33, is by far the most experienced of the pair, having made over 200 appearances for the club.

In contrast, 21-year-old Bartley has played five times since joining from Arsenal before the start of the season.

His first appearance came in the first round Capital One Cup win over Barnsley in August, and his only game playing alongside Williams at centre-back was when Flores left the field injured after 33 minutes against QPR.