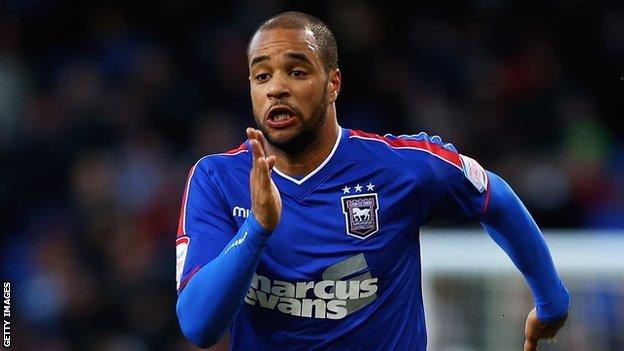 Ipswich Town striker David McGoldrick does not expect to be reunited with former boss Billy Davies at Nottingham Forest at the end of the season.

The 25-year-old with a view to a permanent move.

Davies took McGoldrick to Forest four years ago and has returned for a second spell in charge at the City Ground.

Billy Davies signed David McGoldrick for Forest from Southampton for £1m in the summer of 2009.

The striker scored nine goals in 62 games under Davies, before the Scotsman left in 2011.

"Billy's one of the best managers I've worked under, but I don't think he'll try and get me back there," McGoldrick told BBC Radio Suffolk.

"That's got nothing to do with me. Billy's gone back there and has his own ideas and own players."

McGoldrick has started all seven games since arriving at Ipswich in January, but Town have only picked up eight points from a possible 21 towards their fight against Championship relegation.

The former Southampton frontman, who has been asked to play a deeper role by boss Mick McCarthy, has found the net just once in that time, a contrast to the 17 goals in 25 games he scored while on loan at Coventry earlier in the season.

"[The number of goals] hasn't bothered me. I'm not thinking about it because right now it's all about getting safe," he said, ahead of Saturday's trip to fellow strugglers Huddersfield.

"Doing the dirty work is what they want me to do. The goals will come.

"If I get selected on Saturday the chances will come because Huddersfield will have to come out of the blocks and have to go for a win."