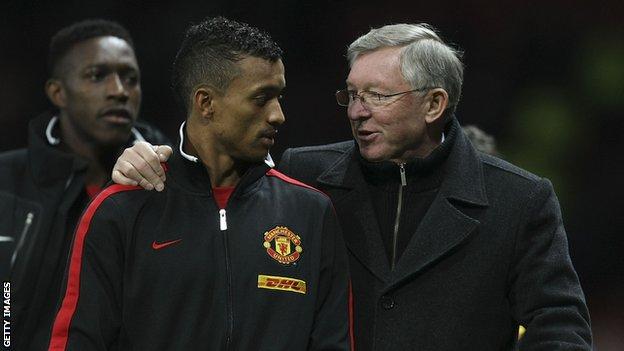 The Portuguese winger, 26, came on as a first-half substitute to score one goal and make another as United beat Reading in the FA Cup fifth round on Monday.

But Nani, who is out of contract in 2014, has struggled for form and has made only five league starts this term.

His agent has held talks with the club over a new deal, though, and Ferguson said: "It's up to the boy himself."

The United manager has indicated that he wants to keep the winger, who signed from Sporting Lisbon in June 2007.

Ferguson said: "Nani is definitely one of the best match-winners in Europe. He scores incredible goals. He has an incredible talent for winning matches. We would like him to stay."

Nani, though, was linked with Arsenal and Tottenham ahead of the last transfer window, despite Ferguson insisting that he had no intention of selling him.

Ferguson said Nani wanted a guarantee of regular first-team football, but has told him that the best way to achieve that is to keep playing well.

"David has been speaking to his agent for quite a few weeks now," Ferguson said. "It's up to the boy himself.

"He has a year-and-a-half left and we'd prefer to keep him. He wants guaranteed first-team football and will get it if he plays like he did [against Reading]."