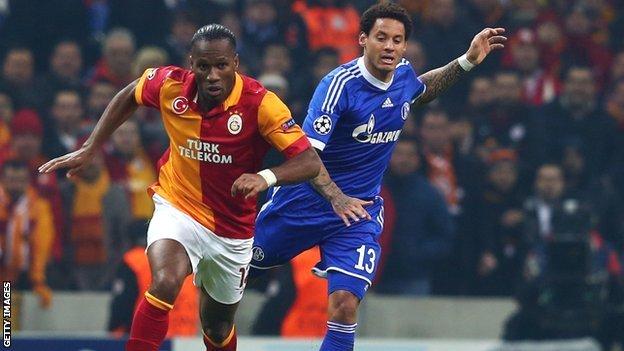 Bundesliga side Schalke 04 have lodged a protest with Uefa over Galatasaray striker Didier Drogba's participation in their 1-1 Champions League draw.

"There are doubts about the validity of the permission to play Drogba in the Champions League," the German club said on their official Twitter account.

"Schalke 04 reserves its rights and is looking into this."

Uefa confirmed it had received "a protest concerning Drogba's eligibility".

The European governing body said its disciplinary panel would investigate the matter but had not yet set a date.

Ivorian Drogba made his European debut for the Turkish club on Wednesday, after joining them in January from Shanghai Shenhua.

The former Chelsea forward signed an 18-month contract with the Istanbul side after moving from China.

The Chinese club - with whom he had signed a two-and-a-half-year deal last June - opposed the move.

He made his full debut in the last-16 tie, following his appearance as a substitute in a league game last Friday, in which he scored just minutes after coming on.

The two sides meet in the second leg of the tie on 12 March in Gelsenkirchen.

Drogba won the Champions League with Chelsea last season and was also a member of the Ivory Coast team which lost to eventual champions Nigeria in the quarter-finals of the Africa Cup of Nations.