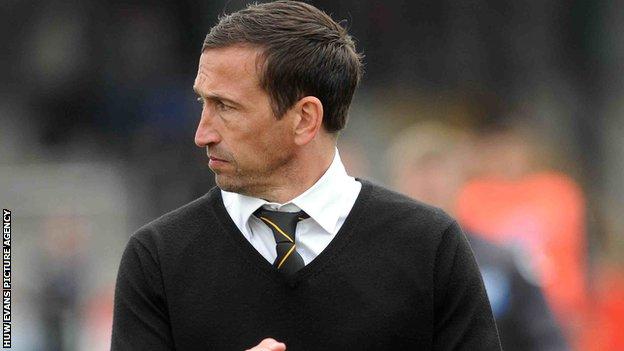 Manager Justin Edinburgh says he is not interested in the form of Newport's Blue Square Bet Premier promotion rivals.

The Exiles are fifth in the Conference Premier, five points behind leaders Wrexham but with two games in hand.

But Edinburgh says Newport must concentrate on their own promotion campaign rather than worry about other teams.

"I'm not really worried about anyone else," Edinburgh said.

"We can't affect that. All we can affect is what we do and that's our sole concentration at the moment.

"All we can do is work on our own game and make sure that we're ready for every game that we have between now and the end of the season."

Edinburgh said after last Saturday's 3-1 win at Woking that Newport were back in the hunt to win the Blue Square Bet Premier title.

Striker Rhys Griffiths is in line to make his County debut against Telford on Saturday after joining the club following his release by Plymouth Argyle.

"It gives us more physical presence that we perhaps haven't got," Edinburgh said of Griffiths' signing.

"[He's got] good experience and knows where the back of the net is so we're really pleased with Rhys's addition to the squad.

"[We] look forward to him having a big impact between now and the end of the season."