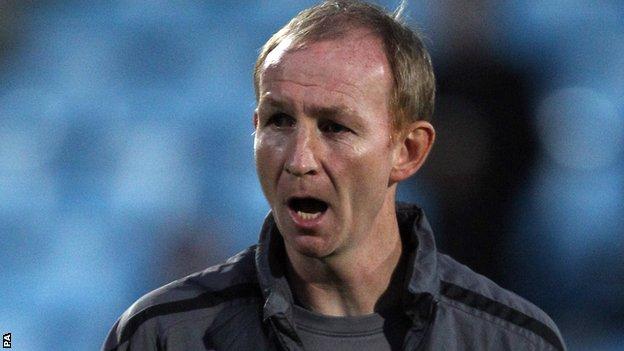 Torquay interim manager Alan Knill is unconcerned by the prospect of being out of a job at the end of this season.

Knill has taken caretaker charge at Plainmoor until this summer in the absence of permanent boss Martin Ling, who is currently on sick leave.

"To be honest, it wasn't about a job long-term, it was just for me to get back to what I love doing," the 48-year-old told BBC Radio Devon.

"The job will take care of itself, somewhere else probably."

He added: "Obviously we all wish Martin well, and the sooner he makes a speedy recovery the better.

"But I'm just here to help. I had a phone call which said would you come and help out, and it just really appealed to me.

"It's quite a big move from Sheffield, where I live, to down here, but I've always enjoyed coming to Torquay so I jumped at it."

Knill takes over a Torquay side that have endured a run of five defeats in a row and find themselves sitting 19th in League Two.

The former Bury and Scunthorpe manager's first game in charge is at home to second-placed Port Vale, who have only lost once in seven games.

However, Knill is confident that his side can get a result at Plainmoor on Saturday.

"We expect three points," he said. "We're playing at home and if you look at the season as a whole we can compete, it's just the last five games that results have gone against us.

"We're more than capable of competing against anybody in the league, and the test is can we compete against the top teams. I'm hopeful that we will do."