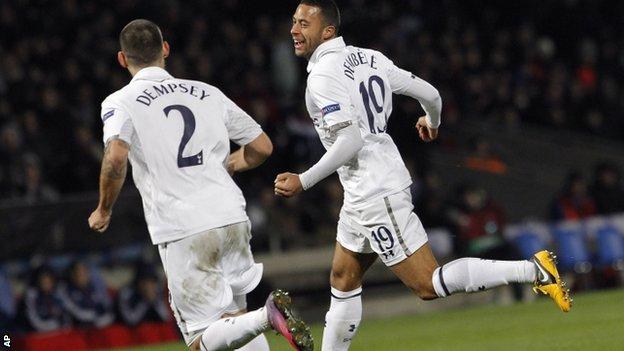 Tottenham manager Andre Villas-Boas said he is relishing a meeting with Inter Milan after his team dramatically reached the Europa League last 16.

Spurs were on the verge of elimination until Mousa Dembele's late strike secured a 3-2 aggregate win over Lyon.

"We just want to recreate a special night everyone remembers at the club," said Villas-Boas after the 1-1 draw.

"Going through against Inter Milan and Lyon [would] put you in a good place to win the competition."

Two years ago, during the group stages of the Champions League, Gareth Bale produced phenomenal performances against Inter, who were then the defending European champions.

The Welshman scored a hat-trick in a 4-3 loss at the San Siro and was equally impressive at White Hart Lane, with the Spurs manager at the time, Harry Redknapp, describing the midfielder's feats as "amazing".

Bale was far less terrifying in France and Villas-Boas admitted his team did not play well in the first half in Lyon, as Maxime Gonalons scored to overturn the Londoners' 2-1 advantage from the first leg.

But Villas-Boas said: "In the second half we were the better team.

"We created some chances and we were rewarded with the second goal in the end. Individual players make a difference and Mousa certainly made the difference.

"If you look at the number of chances Lyon had over the two legs it would not have been fair if they had gone through."

Dembele, a summer signing from Fulham, admitted he experienced "all sorts of emotions" after scoring from 25 yards in the 90th minute.

"Everyone is buzzing to continue in this competition, which is why we reacted so fully, so joyfully in the end," said the Belgium international.