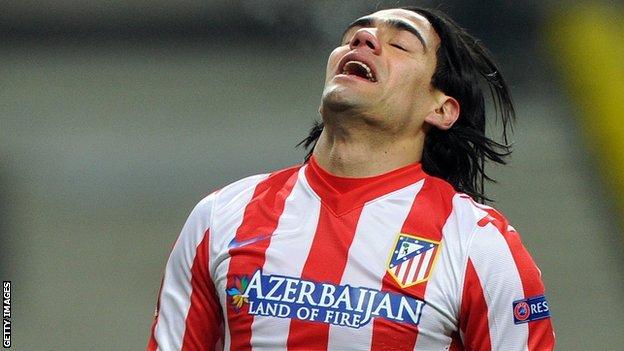 Europa League holders Atletico Madrid are out of the competition despite winning 1-0 away at Rubin Kazan.

Falcao scored the only goal of their last-32 tie against the 10 men of Rubin but they went out 2-1 on aggregate.

Atletico had 18 attempts on goal against Kazan who had Gonzalez Cesar Nevas sent off with a minute remaining.

The competition also saw its first ever penalty shoot-out - outside the qualifying rounds - as Steaua Bucharest saw off Ajax.

Steaua won 2-0 on the night to mirror the scoreline in Amsterdam a week ago. Extra-time failed to separate the two sides and the home side won 4-2 on penalties after Lasse Schone and Niklas Moisander missed from the spot for the Dutch.

The Romanians face Chelsea in the last 16.

Elsewhere Inter Milan set up a last-16 tie with Tottenham with a 5-0 aggregate win over Cluj.

Fredy Guarinscored twice before Mario Camora was sent off and substitute Felice Piccolo made it 3-0 on the night.

Newcastle will face Russian side Anzhi Makhachkala in the last 16 after they beat Hannover 4-2 on aggregate. The match ended 1-1 with Lacina Traore equalising in the ninth minute of injury time.

Anzhi entered the competition at the second qualifying stage, along with Viktoria Plzen who also reached the last 16 with a convincing 5-0 aggregate win over Napoli.

FC Basle are also through, 3-1 on aggregate, after drawing 1-1 with Dnipro Dnipropetrovsk in the second leg.

Both teams were reduced to 10 men as Dnipro had former Blackburn striker Nikola Kalinic sent off. Both goals came from the penalty spot.

Levante secured their place in the last 16 with a 4-0 aggregate win over Olympiakos, while Fenerbahce beat 10-man Bate Borisov 1-0.

Bordeaux are also through after a 2-1 win over Dynamo Kiev while Benfica beat Bayer Leverkusen 3-1 on aggregate.

Lazio beat Borussia Moenchengladbach 2-0 to wrap up a 5-3 victory on aggregate while Stuttgart beat Genk 2-0 on the night and 3-1 overall.