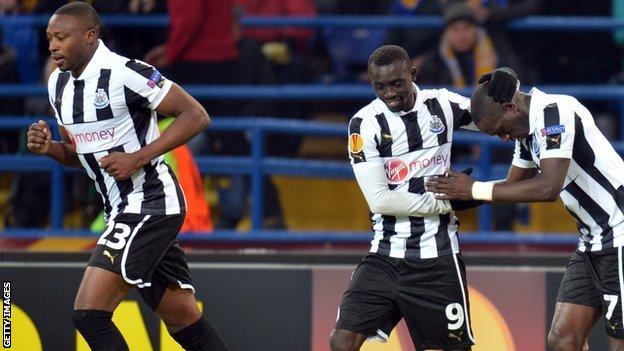 Newcastle manager Alan Pardew believes his side can give the Europa League "a good go" after reaching the last 16 with a 1-0 win at Metalist Kharkiv.

After a goalless home first leg, Shola Ameobi scored a penalty to set up a tie with Russian side Anzhi Makhachkala.

Cheick Tiote and Hatem Ben Arfa were both missing from the win in Ukraine.

Pardew said: "With Ben Arfa coming back and Cheick to add to that side, I really feel as though we can give this competition a good go."

Having only just recovered from a hamstring injury, attacking midfielder Ben Arfa was not risked while Tiote was taken ill and replaced by Vurnon Anita.

"We lost Cheick just before the game, but Anita did an excellent job coming in late," said the Magpies boss. "He only knew an hour before we kicked off that he was going to play."

Pardew also praised Ameobi, who scored his 15th goal in European competition. Only Alan Shearer has scored more goals in Europe for Newcastle.

"I had a little quiet word with Shola before the game because, in the last few weeks, I thought his contribution could have been greater," he said.

"But he's shown tonight what quality he has. Against this team, I always thought he might influence the game.

"He did that all night really and it bodes well moving forward."