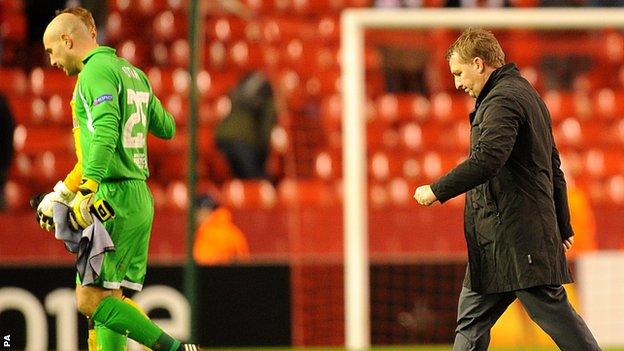 Manager Brendan Rodgers has called for a strong finish to the campaign after Liverpool's Europa League exit ended their hopes of silverware this season.

On Thursday, the 39-year-old's side were eliminated at the last-32 stage by Russian champions Zenit St Petersburg.

But the Reds recovered from a three-goal deficit in the tie to miss out on away goals after a rousing comeback.

"We lost the battle," he said. "But the war going forward will very much be won if we keep performing like that."

Liverpool's season at a glance

It is Rodgers's first season in charge at Anfield following his summer switch from Swansea. His team are seventh in the Premier League - outside the Champions League and Europa League qualification places - and were knocked out of both domestic cup competitions in the fourth round.

Despite the failure to add to his new club's trophy cabinet, the Northern Irishman promised his team "will get stronger" in the remainder of the campaign.

He said: "There are 11 games to go and we want to finish as high up the league as we can, keep the improvement going and keep the progression going. We do not stop until the whistle blows against Queens Park Rangers in our final league game.

"It has been difficult in the last few months playing so many games - it is hard to tactically prepare as much as you want. We will not drop off and, if anything, we will get stronger."

A 2-0 deficit after defeat away to the Russians in the first leg was made larger when Jamie Carragher's under-hit backpass was punished in clinical fashion by £32m Brazil international striker Hulk.

Liverpool refused to buckle despite the setback and fought back thanks to a brace of free-kicks from Luis Suarez and a Joe Allen tap-in that put them within one goal of an unlikely qualification for the next stage.

"We had a lot to do at 2-0, and then we go 3-0 down in the tie," Rodgers said. "Many teams would have given up but for us it was a great night in terms of the performance and the result.

"We just could not quite muster a fourth goal, which at this level is very, very difficult to do against a top team in Zenit. They were playing Champions League football at the start of the season.

"It was a very proud night to be manager of the club. It is for nights like that that I came here.

"I thought the players were phenomenal and they gave a monumental performance. The supporters united behind them and we were fractions away from a monumental result."