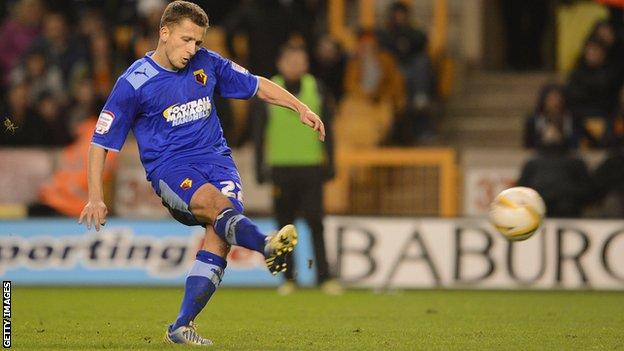 Bakary Sako scored a dramatic equaliser in the third minute of stoppage time to earn struggling Wolves a crucial point against Watford at Molineux.

The Hornets looked set to move to within five points of Championship leaders Cardiff City after Almen Abdi scored from a 22-yard free-kick.

But Watford substitute Fernando Forestieri twice blazed over late on.

Second-placed Watford have now lost just just three times in 21 league games. But, with third-placed Crystal Palace winning 1-0 at Derby County, Gianfranco Zola's Hornets are now only two points ahead of the Eagles in the race for automatic promotion.

Wolves in the Championship under Dean Saunders

Wolves, still without a win since Saunders took charge in January, remain in the bottom three, but move to within a point of safety ahead of trips to Millwall and Nottingham Forest before the now seemingly crucial home clash with fellow strugglers Bristol City on 16 March.

Saunders' team could easily have been in front on 19 minutes, only to be denied by a double save from Watford keeper Jonathan Bond, deputising for the injured Manuel Almunia.

Having blocked Kevin Doyle's left-foot shot, Bond pulled off an even better save to keep out Bjorn Sigurdarson's stinging right-foot volley from the rebound.

After that, Watford started to take command, going in front four minutes before the break.

Home skipper Karl Henry was pulled up for a challenge on Matej Vydra on the edge of the box and Abdi took full advantage, curling home a stunning right-foot free-kick.

The hosts threatened after the break when Sigurdarson cut in from the right to test Bond with a low right-foot shot, but Ikechi Anya should have put Watford 2-0 up when he screwed across the face of goal.

Substitute Jake Cassidy, on for the recalled Stephen Hunt, brought Wolves hope when he forced another save from Bond, only for on-loan defender Jack Robinson to shoot high and wide.

"Late goals normally come for teams at the top, who are full of confidence and have belief.

"We did enough to get at least a draw and this feels like a win. We have to really kick on from this and take this feeling into our next game at Millwall on Tuesday night.

"David Davis made a big difference. He must have made about 15 tackles when he came on.

"It's St David's Day today and I hoped we might get a bit of luck. But then I found out that their keeper Jonathan Bond is Welsh. And he had a good day too."

"It is disappointing. I thought we were in control and I did not see it coming.

"We had opportunities to score a second goal and we did not take them.

"Fernando Forestieri is a good enough player to convert chances like that and we will have to see how he responds to this.

"But we cannot despair at not winning the game."