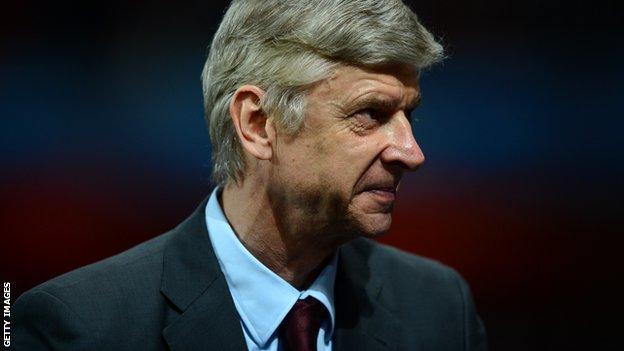 Arsenal manager Arsene Wenger says he has "not for a second" considered quitting the club this week.

Arsenal's chances of reaching the Champions League quarter-finals were hit when they lost 3-1 to Bayern Munich in the last 16 on Tuesday.

This followed a fifth-round FA Cup exit at the hands of Championship Blackburn.

"We need to be united and strong and not be too destabilised by people who have strong opinions after one game," he said.

"Arsene Wenger is facing greater scrutiny than at any point in his 16-year reign. But I'm told the Gunners have absolutely no intention of sacking him - regardless of whether they qualify for next season's Champions League.

"Wenger is contracted until 2014 and while we do not know how long he plans to remain in charge, increased TV revenue and a new shirt sponsorship deal mean significant funds are available to him this summer.

"Arsenal recognise their shortcomings and understand their fans' concerns, but they believe they are putting pieces in place to compete with Europe's biggest clubs in the near future. "

Wenger has been under scrutiny this week, with some reports suggesting that he should consider his future.

Arsenal have not picked up silverware since beating Manchester United on penalties to lift the FA Cup in 2005.

Wenger's side were also knocked out of the Capital One Cup by League Two side Bradford in December.

In his news conference, Wenger was asked if he had "felt like throwing in the towel".

He replied: "Never, not one second.

"I have a contract until the end of 2014 and at the moment we are on a short-term plan. I have been here for a long time and have to consider what I want to do. That will be decided in 2014, not before."

It is understood that Wenger's position is not at risk, even if Arsenal fail to qualify for next season's Champions League.

The club held their monthly board meeting on Thursday and Wenger says that it was "the usual thing".

"The board meeting speaks about many things and it's about commercial [activities], ticket prices, long-term plans and I make my report as well on the technical side so it was the usual thing."

Wenger said: "We are in a position where we cannot afford to drop points. We will go into the game with a huge desire to get out the disappointments we have had.

"Apart from Manchester United, for all the other positions, I feel it's very open. It's just down to us now to continue to be consistent like we have been. We have to focus on continuing to get the points."

Wenger showed some anger in a press conference prior to the Champions League match against Bayern, over reports he was going to be offered a two-year contract extension by Arsenal.

But on Friday, he said he had since "calmed down" and he joked with journalists, telling one he would beat him in a one-on-one match.