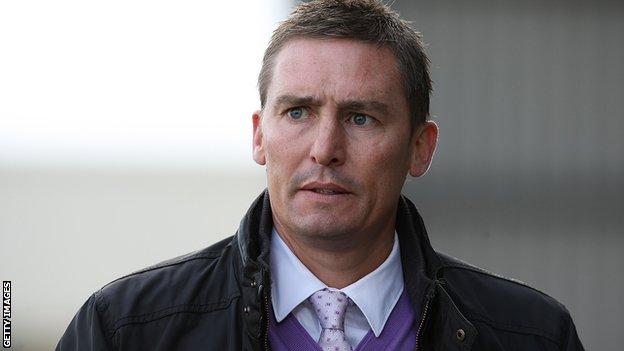 He replaces Dean Holdsworth, who was sacked by the Hampshire outfit on Wednesday after two years in charge.

Scott, who had been without a job since leaving Rotherham in March last year, takes charge with the Shots two points above the League Two relegation zone.

He will be assisted by Terry Bullivant and the duo have signed deals until the end of the 2013-14 season.

A club statement said: "Having drawn up a shortlist of credible candidates since the departure of Dean Holdsworth, the board of directors felt that the experienced team of Andy and Terry offered the football club a real opportunity of making progress in the immediate and longer term."

Scott says he is confident of the club retaining their Football League status this season.

"Football management is all about pressure," Scott told BBC Surrey.

"It's about having confidence in your own ability and the people around you. There is light at the end of the tunnel.

"The directors here are honest and up front and made it clear what their priorities were - and that is to stay in this league. From then on we will discuss things in the summer and that is fine by me.

"I believe we can get enough results to stay up and then we can look to build some sort of foundations to make this a club people will be proud of."

Shots chief executive Andrew Mills added: "The deal will be until 2014, even if the club go down.

"We needed a credible management team."

Scott, who had spells with Sheffield United, Brentford, Oxford United and Leyton Orient during his playing days, started his coaching career at the O's and became youth team manager.

The 40-year-old joined Brentford in May 2007 as assistant to Terry Butcher but moved into the role of manager the following January following a spell in temporary charge.

He won the League Two title in 2009 but parted company with the Bees in February 2011.

He was appointed as Rotherham manager on a three-year deal in April that year but was sacked in March 2012 with the Millers mid-table in League Two.

"Since leaving Rotherham I have turned down a few jobs that weren't right for me," Scott added.

"I had a difficult time at Rotherham and made mistakes but I have learned a lot from that.

"These things happen very quickly and once Dean left I made contact with Andrew and said I'd be interested.

"From there it was a case of a phone call back saying if I'd like to come down and have a chat and it was a whirlwind from after that.

"In a way I know how Andrew works. The fact he has fired me [at Brentford] shows the faith I have got in him and he has got in me, and that we can learn from our mistakes.

"The fact Andrew is here makes the integration for myself and Terry into the group easier. We are honest with each other and we get places quickly because of that. It is a healthy working relationship."