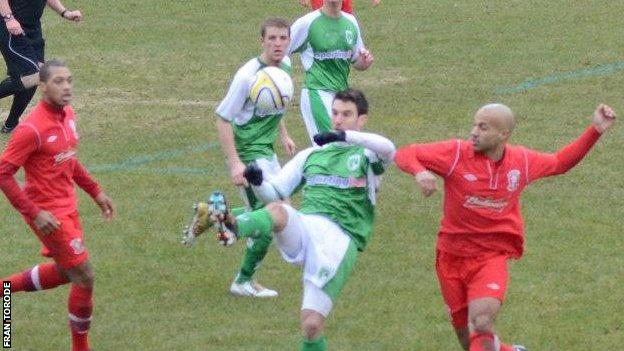 Guernsey boss Tony Vance has hailed his club's groundsman after his side won their first home game in the Combined Counties League for more than two and a half months.

But Vance paid tribute to groundsman Shane Moon after

"Shane's done tremendously well to get the pitch playable and in a decent condition.

"The style of football we play [means] we hope to have the best surface that we can, we know there are some issues down here, but Shane's doing the best for us," he added to BBC Guernsey.

Guernsey are in sixth place in the Combined Counties League Premier Division and are still 17 points off top spot with 10 games in hand on leaders Epsom and Ewell.

And Vance paid tribute to striker Nigel Hutton after he scored on his first home start for the Green Lions.

"He's looking totally confident in this environment, he's been very patient and deserved to start.

"He scored two goals the other night and every time he's come on he's looked confident and comfortable."

Meanwhile Guernsey will face Walsall Wood in the quarter-finals of the FA Vase.

The Midlands-based side won 2-1 after extra time at Runcorn Town in their fifth round tie on Saturday.