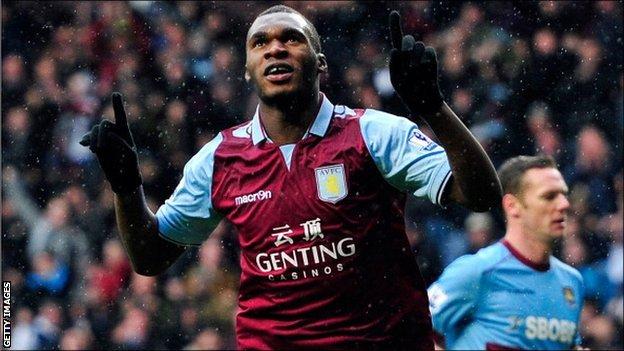 Aston Villa manager Paul Lambert says he will decide on the future of Christian Benteke after insisting the striker will stay at the club.

The Belgian striker 22, was a

He has often kept Darren Bent out of the team this season and has been the subject of transfer speculation.

Lambert said: "As far as I'm concerned the guy's here and he isn't going anywhere until I say so - that's the bottom line."

The impact of Benteke

Benteke has scored 11 goals for Villa in a challenging season that has seen the club drop to 17th in the Premier League - just a point above the relegation places.

Lambert dismissed speculation in January that the player could leave.

"If he keeps progressing the way he's going he'll be a top player. What he's done for this football club in the short time he's been here - he's got to sustain that over not just a year but over his career."

Villa, who beat West Ham in their last game thanks to a Benteke penalty, now face Arsenal in the Premier League on Saturday.

The London club have been beaten twice at home - by Blackburn in the FA Cup and Bayern Munich in the European Champions League - in the past week.

On Friday Arsene Wenger confirmed that he has never considered leaving the club and Lambert gave a message of support for the Gunners boss.

"Everyone can make too much of two defeats because of the club that they are," he said.

"I don't think if you're beaten by Bayern Munich that's a major disgrace because Bayern Munich are ahead of them no doubt about it. Blackburn, yeah I can see why that happens - but Bayern are a top, top side.

"(Arsenal) are still a top side. We're the underdogs. You always do (get pressure) because everybody gets it. Jose Mourinho gets it. You've just got to be big enough and strong enough to take it."