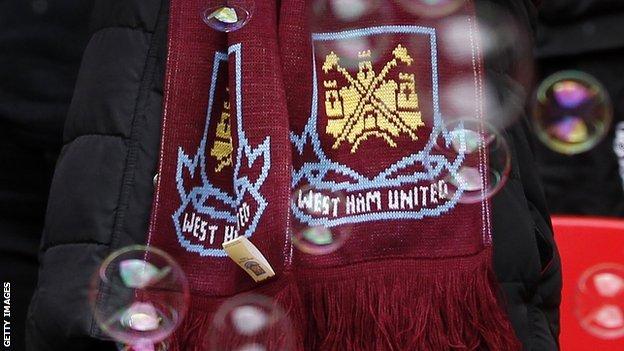 West Ham have warned fans against racist behaviour when the Hammers play Tottenham on Monday.

The match, where the 20th anniversary of Bobby Moore's death will be marked, comes three months after anti-Semitic chanting marred the reverse fixture.

"We must be clear that we will pursue the harshest sanctions against any individual who goes against what we stand for as a club," they said.

Two West Ham fans accepted a police caution, and one of them was given a lifetime ban from matches for gestures made at the 25 November match which Spurs won 3-1.

The two cautioned supporters are understood to have made Nazi-style salutes aimed at Tottenham supporters, who traditionally have strong ties with London's Jewish community.

Hammers manager Sam Allardyce said: "I hope there's nothing untoward that happens in terms of chanting.

"Like everybody else we want to try to reduce it to its bare minimum. We'd like to cut it out completely but I don't think that's ever going to be the case when people get involved in emotional situations.

"But if we spot it, we've got to deal with it and hopefully there won't be any."

Jewish co-chairman Gold said after the match at White Hart Lane that West Ham would have a "zero tolerance" policy, in conjunction with the Metropolitan Police, towards racist behaviour.

The club say they have taken part in several initiatives aimed at tackling discrimination on the grounds of disability, race, sex, sexual orientation and religion.

"Any fan found to be acting inappropriately - including racist, anti-Semitic and homophobic behaviour - will be punished to the full extent of the law and banned from attending matches," said the statement.

A minute's applause will be held before kick-off and supporters will display a mosaic depicting his old No.6 shirt.