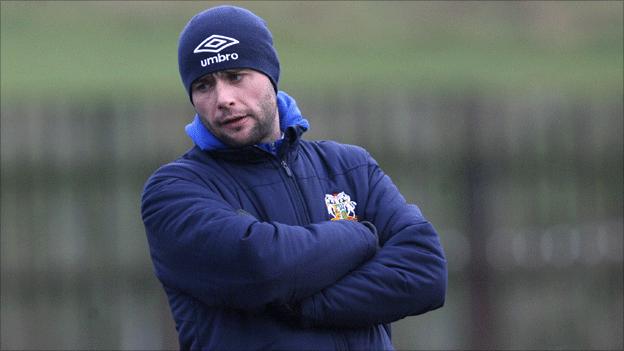 Glenavon manager Gary Hamilton has demanded improvement from his side against Ballymena after a dismal run of seven defeats in eight league games.

"Last Saturday's performance was not acceptable and if we perform like that again Ballymena will turn us over too," said Hamilton ahead of Saturday's game.

"Hopefully the boys have learnt their lesson, we get a reaction, and they come out in the right frame of mind."

Picking up points is a matter of urgency for Glenavon after both of the clubs below them in the Premiership table, Donegal Celtic and Lisburn Distillery, won last weekend.

That means the gap between the 10th-placed Mourneview outfit and DC in 11th position has been cut to eight points but Hamilton is confident his charges will stay away from the relegation zone.

"I'm confident we'll be away from relegation come the end of the season - if we're to win at least two of our next five games, that would secure our position.

Joel Taggart and Jim Cleary are on commentary as Ballinamallard United take on Premiership leaders Cliftonville at Ferney Park.

Michael Clarke and Lindsay McKeown are at Seaview where Crusaders play Dungannon Swifts.

The programme will have reporters at the day's other four games, plus news of the rest of the day's sport.

With that in mind, Hamilton says he is likely to alter the line-up that lost to the Whites, with one change being enforced because of a two-game suspension handed out to Niall Henderson.

"There are boys waiting in the wings for their chance so if they get it, they'll have to do the job. The boys who were in the team last week didn't and that comes down to their desire."

Glenavon's opponents Ballymena have also been struggling recently, having picked up just nine points from a possible 39 in their last 13 Premiership matches.

The Sky Blues have Davy Munster suspended and Alan Teggart out with possible cartilage damage to his knee, sustained in the warm-up prior to last week's defeat by Coleraine.

Linfield have Philip Lowry banned for their home game against Portadown, whose hopes of a place in the top six ahead of the league split at the end of March appear to be fading.

The Ports will check on the fitness of Gary Twigg, Brian Gartland, Gary Breen and Chris Casement, who all missed Monday night's Setanta Cup drubbing at the hands of Drogheda United.

Midfielder Tim Mouncey sits out the game through suspension.

Glentoran are without Callum Birney and Mark Clarke, who was sent-off against Linfield last week, for the same reason, as they prepare to travel to New Grosvenor to play Distillery.

Ballinamallard United aim to end a run of three successive league games without a goal as they target a second league win of the season over leaders Cliftonville.

The Mallards are one of only three teams to have taken full points against the Reds in the league, thanks to their victory at Solitude in September.

Meanwhile Tommy Breslin's Reds are in a rich vein of form, having lost only one of their last 17 league games, and secured 15 points from 15 since their New Year's Day defeat by Linfield.

"After our defeat to Donegal Celtic there is no better way to bounce back than a home game against the best side in the league," said Ballinamallard manager Whitey Anderson.

"We will be playing our own game but we have to come up with a way to stop the threat of (Liam) Boyce and (Joe) Gormley."

Elsewhere, Coleraine take on a Donegal Celtic side, who are without Paul Bradley because of suspension.

Central defender Emmett Friars is ruled out of Dungannon's game at Crusaders as he begins a two-game ban.