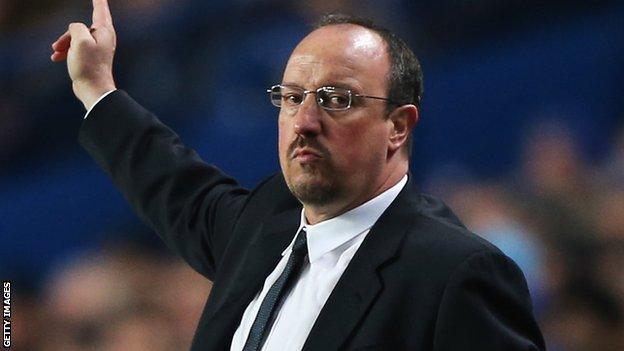 Chelsea manager Rafael Benitez believes his side can still finish in the Premier League's top two if they can beat Manchester City on Sunday.

The third-placed Blues are currently four points behind defending champions City and just one point in front of fourth-placed Tottenham.

"We have to go there with confidence and if we are close we can fight for being in the top two," said Benitez.

"And if not we have to fight for being in the top four."

Since Russian tycoon Roman Abramovich bought the club in 2003, Chelsea have won the Premier League three times and only finished outside the top two twice.

Benitez is desperate to close the gap on second-placed City, who are 12 points behind leaders Manchester United.

Tottenham, Arsenal, Everton and Liverpool will all hope to finish in the Champions League places with a strong finish to the season, and Benitez believes will be a marker in the west London side's campaign.

"The priority is to win; if we win this game we will be closer but if we cannot we have to keep fighting," said the Spaniard.

"What I can see now is a team with confidence, we are confident we can beat City or anyone if we do things in the right way.

"The race for the top four will go on until the end of the season.

"Our last game is against Everton so I'm sure that, until the end of the season, we will be winning games or losing games or whatever but it will be very tight, very close.

"I think that one game can make a big difference so until the end it will be difficult for everyone."

Unlike City, Chelsea are still involved in European competition and reached the last 16 of the Europa League following a hard-fought 1-1 draw with Sparta Prague on Thursday.

Fernando Torres played up front, in place of the cup-tied Demba Ba, and Benitez said his compatriot continues to be a key player for the European champions despite scoring just once - against League One side Brentford - in his last 14 appearances.

"Obviously as a manager you want your players, and especially your strikers, scoring a lot of goals," added Benitez.

"When you analyse players, with strikers it is easy to say 'how many goals?' but when you're playing with 11 players they all have to do their jobs and part of the job for Fernando is to create space and to put players in good positions with his movement."