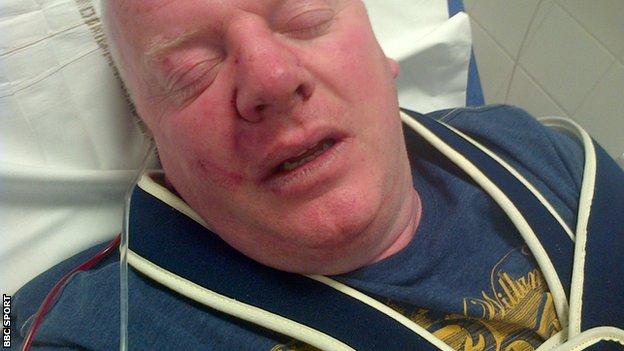 A Spurs fan said he feared for his life when he and his son were attacked by a gang in Lyon.

Paul Eccles, 51, was punched and kicked to the ground by a group of about 20 hooded men who had just attacked an English pub nearby.

I managed to stagger to a restaurant and I was covered in blood. A young lad pulled me in just as the gang were coming for me again

Mr Eccles was one of three fans admitted to hospital after being assaulted by the gang in the build-up to Tottenham's Europa League game against Lyon.

"What really frightened me, when I was on the ground and I was getting a kicking, was I expected a knife in my back at any moment," he said.

The Spurs supporter and his 20-year-old son Patrick were confronted by the group in the narrow cobbled streets of the city's old town on Wednesday night.

"Patrick was about three yards in front of me and one of the group asked him: 'Are you English?'

"As soon as I heard that, I knew we were in trouble. It was the tone and the manner in which he said it.

"Someone came behind him and started punching him to the side and back of his head.

"I feared for my son so I jumped in to try to help him and get him back. But I realised very quickly I was outnumbered.

"There were about 20 of them. I hit a few of them but then someone came behind me and then I hit the ground.

"They kicked the life out of me. I could hear Patrick shouting but all I could do was try to protect my temples.

"There was only the two of us there and it was frightening for my son and for me."

The father and son, who live in Glossop in Derbyshire, were saved by the swift actions of local bar and restaurant workers.

"I managed to stagger to a restaurant and I was covered in blood. The side door opened and a young lad grabbed me and pulled me in just as the gang were coming for me again," he said.

His son was taken indoors by another local man who then alerted police and paramedics. The man then warned the 20-year-old that he would be killed if he attempted to return to the street to find his father.

Mr Eccles was then taken to hospital for treatment to his extensive injuries.

"I was in hospital for 12 hours with a broken shoulder, broken tooth and bruising all over my back, legs, arms and fingers.

"I saw two other Spurs fans in there. One had a broken arm with a metal plate in, the other had a cut down his head. Someone said it was from a bar-stool."

It was only the next day, having been discharged from hospital after having an MRI scan to see whether he had suffered any brain injuries, that he was told the gang were probably armed.

Returning to the bar to thank the staff who intervened, Mr Eccles discovered the full extent of the danger he was in.

"One of the men who helped us told me: 'You're lucky because I believe one of them had a machete and one had an axe. If you had stayed down you would have got it.' It's quite frightening."

Police in Lyon have said they believe a far-right group was responsible for the attacks on Spurs fans.

But Mr Eccles was not put off by his experience of travelling to watch Tottenham in Europe and may still go to see them play Inter Milan next month if his health allows.

He said: "After breaking your shoulder and getting a kicking by a group like that, it obviously makes you think. It's extremely sad.

"This could have happened to anyone. But those words 'are you English?' - it sends a chill down your spine."

"This is not football - this was a far-right group. It doesn't put us off travelling at all. There are people like this everywhere."

In November, 10 Tottenham fans were injured when a far-right group attacked a bar in Rome before the club's Europa League game against Lazio.

Mr Eccles said he believed the attacks have been connected to Tottenham's historic association with the Jewish community - fans still refer to themselves as 'Yids'.

"I don't think we appreciate how bad the anti-semitic feeling is in Europe," said Eccles.

A report by the security unit of France's Jewish communities this week claimed there had been a 58% increase in anti-semitic incidents in the country last year.

"To us, [using the term 'Yids'] is our badge, it's what we are. It's a throwaway term that we use for ourselves," added Mr Eccles.

"Over here, it's a lot more focused. Sadly, I think that's what this [attack] was all about."

Mr Eccles spent Thursday afternoon with the police making a statement, while his son identified two of the alleged attackers in a line-up at the station.

David Lammy, Labour MP for Tottenham, has called for a careful review of security around Spurs supporters travelling abroad for games.