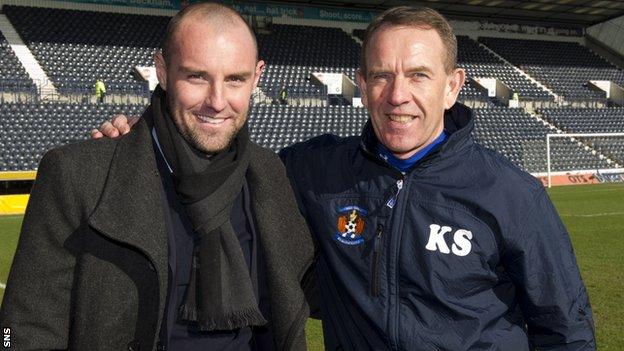 Kilmarnock have re-signed striker Kris Boyd in a deal which will keep him at Rugby Park until the end of the season.

The 29-year-old was a free agent after leaving Major League Soccer side Portland Timbers.

I'm delighted as this is where it all started

Boyd is the Scottish Premier League's all-time top scorer with 164 goals across spells at Killie and Rangers.

"Yes it's done," Boyd told BBC Radio Scotland. "I'm delighted to be back. Hopefully, I can get some games and we finish as high as possible."

And he added: "I've plenty of years left in me yet. It's important I'm playing on a regular basis.

"I've just passed my medical and everything's all done and dusted.

"When I came back to Scotland, Killie had phoned but I wanted to spend some time with family first.

"When you come home you appreciate what you've got and playing at Killie gives me a great chance to play football near my family."

Boyd was not be registered in time to face Aberdeen on Saturday, but hopes to be in contention for Wednesday's game at Hibernian.

"You're never fully fit until you're playing games and that's what I need," he said. "Hopefully on Wednesday night I can play a part.

"I've been training with Rangers the last two months so I must thank them for that.

"You see Faddy [James McFadden] going back [to Motherwell] and he's probably on a similar boat to me - being settled back at home and playing football.

"You play your best football when you're happy and settled.

"I'm delighted as this is where it all started."

Capped 18 times, he has scored seven times for Scotland and will wear the number 11 shirt for Kilmarnock.

Killie manager Kenny Shiels said: "Scottish football gets a lot of negative publicity but this is a positive move for us.

"In the first case he's here until the end of the season. Mutually we're hoping to extend that, but we'll see how things go."