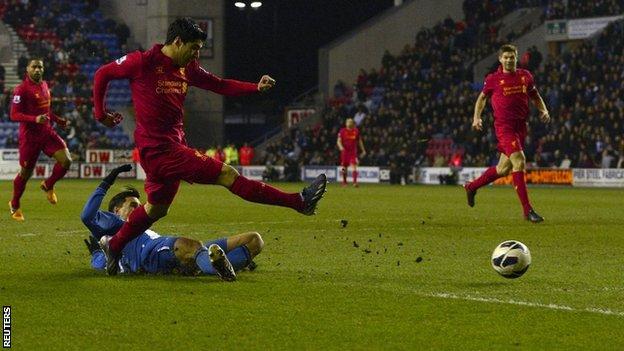 Luis Suarez scored a hat-trick as Liverpool thrashed Wigan and boosted their hopes of European qualification.

Brazil's Philippe Coutinho was integral to the first two goals, crossing for Stewart Downing to head in from close range before playing in Suarez, who slotted past keeper Ali Al Habsi.

The Uruguay forward made it 3-0 before the break with a deflected free-kick before he poked in his third.

Liverpool's Spanish keeper, renowned as a superb shot-stopper, excelled himself with a glorious clawed save to prevent Boyce's spectacular effort from finding the top corner before tipping over Di Santo's point-blank header.

Had either of those first-half efforts gone in, the Latics might have had hopes of fighting their way back into the match, but this was Liverpool's day as manager Brendan Rodgers saw his side follow up their 5-0 win over Swansea with an equally dominant victory at the DW Stadium.

Luis Suarez has now scored more Premier League hat-tricks away from home than Alan Shearer (2). Only Owen (5) & Rooney (4) have more

The result leaves the Reds only five points behind fifth-placed Arsenal. The Gunners play their game in hand at Spurs on Sunday.

For their part, the hosts missed a chance to move clear of 18th-placed Aston Villa. Instead they remain a single point above the Midlands side, who are at home to Manchester City on Monday.

Downing began the rout with only his second league goal for Liverpool when he leapt to nod in from close range after a brilliant jinking run by Coutinho.

The South American pair of Coutinho and Suarez quickly established a good understanding and duly combined for the second goal.

The Brazilian caused panic among the home defence before stabbing a pass through to Suarez, who took the sting off the ball and slotted expertly past goalkeeper Al Habsi.

Seconds after the restart, more cracks began to show in the Wigan defence as team-mates Boyce and James McArthur squared up to each other after Suarez had been played in on goal following a poor backpass.

And the Latics day went from bad to worse when Suarez added a third when his free-kick came off the head of Shaun Maloney and crept inside the far post.

The Latics conceded the fourth shortly after the restart when England full-back Glen Johnson produced one of his trademark surges down the right and played in Suarez, who poked his shot through the legs of Al Habsi.

Any realistic hopes of revival had passed, but Wigan still created chances with Reina yet again coming to Liverpool's rescue - pushing away Paul Scharner's header and preventing Arouna Kone from getting a touch on a cross that flew across his goal.

Liverpool's pressure eased in the last half-hour, and they created just one more opportunity when substitute Henderson had his header cleared off the line by James McCarthy.

"This was a place that's been very difficult to win at - it's been a number of years.

"Roberto [Martinez] has done an outstanding job and everyone understands it's a very tricky place to come.

"Our defensive organisation was very good and we're very pleased to score goals. [Suarez] is a real pleasure to work with. Every week I stand talking superlatives, but his biggest attribute is humility. He never looks for a lazy day and is the first out on the training pitch every day, which is why he's so special to his team-mates.

"[Coutinho] is young but has played over 100 games and a lot of them have been at the top level. He owns the ball, he was born with the ball at his feet."