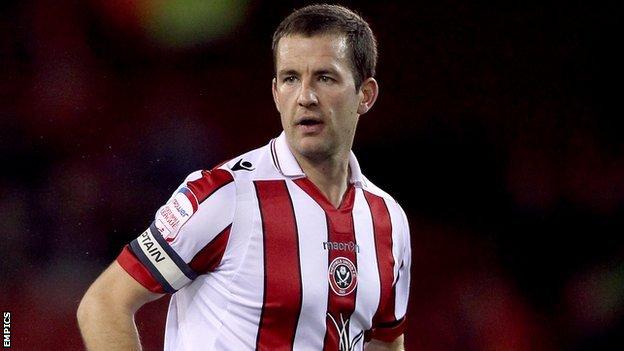 Sheffield United maintained their automatic League One promotion bid with second-half goals from Michael Doyle and Dave Kitson at Oldham.

The Blades went in front on 57 minutes when Dominic Poleon's shot was half-saved by Alex Cisak, only for Doyle to put away the rebound from 12 yards.

But United sealed the points late on with Kitson's 10th goal of the season.

Cisak charged off his line and failed to gather Tony McMahon's free-kick, giving Kitson the chance to head into an empty net from 14 yards.

The Blades' sixth game without defeat, to cap boss Danny Wilson's 100th game in charge, keeps them within a point of leaders Doncaster Rovers and two ahead of Swindon Town on a day when all the top three won.

But, in the week when they also exited the FA Cup, managerless Oldham's first defeat in four league games plunges them back into the bottom four.

"There was nothing between the teams on today, but two individual errors have cost us the game.

"We know that we've got a massive game next week at Tranmere, but it's in our hands.

"It's disappointing to drop back into the bottom four, but it's going to be nip and tuck for the rest of the season. The sooner we get those wins, the better."

"It's a great result for us, coming away from home against Oldham, who have done fantastically well over the last couple of weeks.

"We knew it was going to be tough. It's never an easy place to come, and at half time we just said keep going, keep the shape, be resilient and we knew we'd get a chance.

"The chance came and when you get them you've got to take them."

"So really pleased to come away and get another win."