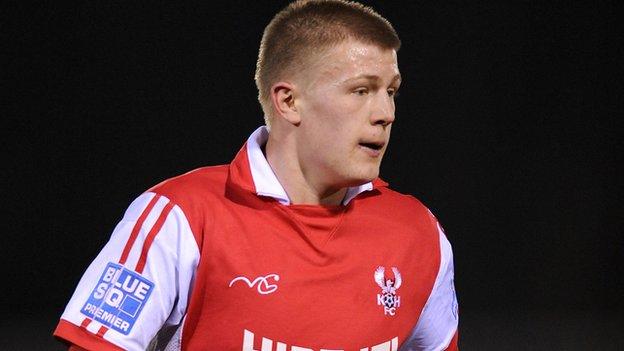 Kidderminster Harriers moved level on points with Blue Square Bet Premier leaders Wrexham as they hung on to beat struggling Ebbsfleet at Aggborough.

Fleet took an early lead when home keeper Danny Lewis could not keep out Adedamola Shitta's shot, only for James Vincent to level within a minute.

But Nathan Elder's penalty two minutes into injury time pulled one back.

The Harriers had a further three minutes of injury time to negotiate before they could claim their 16th win in 18 league matches.

But, with leaders Wrexham dropping two points in their 1-1 home draw with Alfreton, Steve Burr's in-form side are now second on goal difference.

Harriers were without on-loan Macclesfield striker Amari Morgan-Smith, who had been due to complete his month's stay after Saturday's match, but went back to his parent club as the agreement allows for an immediate recall once the first 28 days have elapsed.

"We were a bit slow to start, but conceding a goal kick-started us a bit and fortunately we went straight back up and got the equaliser.

"In the second half I thought we created a lot more chances and looked more of a threat. Malbs took his goal well and Callum gave us a bit of a cushion but they had a penalty at the end there and we were a bit disappointed with the decision."

"I know how organised Liam Daish has his sides and we knew how difficult it would be because they're fighting at the wrong end of the table - we expected nothing different."

"I'm repeating myself a bit but the lads had a good go and a big decision went against us.

"It was deemed no foul on Preston Edwards for their equaliser. That puts them back in the game when I thought we were pretty much on top.

"We had some great chances - Tobi Alabi had a good chance before we scored - but that was a massive decision away from home, especially with the form they are in. They don't need decisions like that.

"Although we came in 1-1, it gave them an incentive and they realised they got away with that. Kidderminster came out again stronger physically than us and we couldn't cope with that."