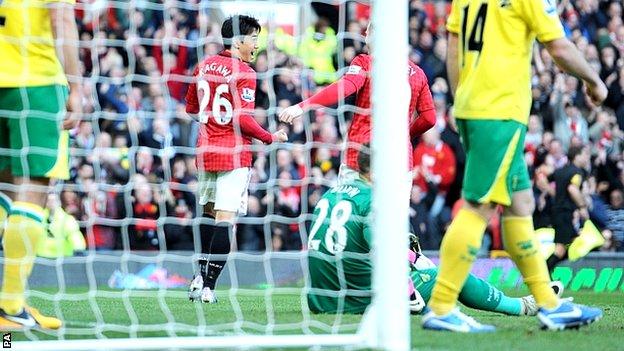 Shinji Kagawa scored a hat-trick as Manchester United beat Norwich at Old Trafford and extended their lead at the top of the Premier League to 15 points.

Norwich pressed for an equaliser but Kagawa ended their hopes with a neat finish before dinking a third.

Wayne Rooney sealed the victory with a stunning effort as United warmed up for the visit of Real Madrid in style.

Three days before their visit in the second leg of the Champions League last 16, the Spaniards will take note of the ruthless manner in which Norwich were killed off.

In fact United were not at their best, but nor did they need to be, a low-key match wrapped up in comfortable fashion later on.

With a healthy lead over Manchester City and that crucial European match looming, Ferguson made six changes, so the anticipated 1,000th senior appearance by Ryan Giggs - a day after signing that will take him into a 23rd season at the club and past 40 years of age - would have to wait for another day.

"Manchester United are 15 points clear at the top of the Premier League. They also sent out a little bit of a message to Jose Mourinho and Real Madrid. They have a new hat-trick hero in Shinji Kagawa and there was a spectacular strike from old favourite Wayne Rooney."

But there was no shortage of attacking quality, Robin van Persie and Rooney lining up in attack as Antonio Valencia and Kagawa provided ammunition from wide.

Norwich, the in the top flight, actually made the stronger start, Bradley Johnson failing to pick out an unmarked Grant Holt with a disappointing left-wing cross.

However, United's central midfield pairing of Michael Carrick and Anderson swiftly began to dictate the tempo and it was not long before Ferguson's men found themselves camped in opposition territory.

Bunn raced off his line to foil Van Persie after the Dutchman played a one-two with Rooney, but the goalkeeper should have done better as United took the lead moments before half-time.

Just when it seemed Norwich had reached the break unscathed, Van Persie deflected Valencia's cross into Kagawa's path and the Japanese midfielder sent a low strike past Bunn at his near post.

The visitors carried a far greater threat in the second period and Russell Martin - who did not appear to know Holt had been penalised for climbing on Patrice Evra in the build-up - shot over from close range when it seemed easier to score.

Chris Hughton then introduced Kei Kamara, fresh from his and the Sierra Leone striker was denied by some dogged defending from Jonny Evans.

That proved a pivotal moment, however, as Carrick found Rooney with a long pass and the England striker teed up Kagawa to coolly wrong-foot Bunn and double the lead.

The same man then raced through to chip his hat-trick and Rooney got in on the act with a stunning long-range fourth.

"Conceding just before half-time hurt us but we were still very much in the game.

"This was never going to define our season, but we're certainly disappointed.