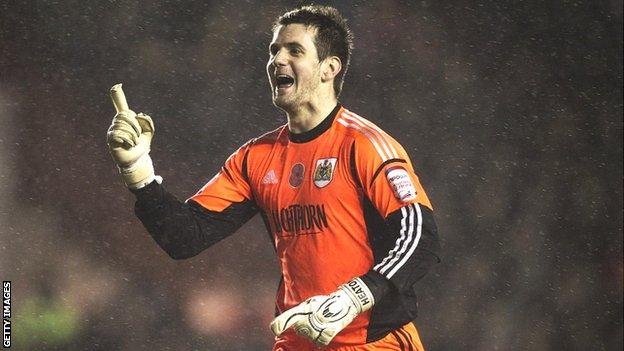 Tom Heaton's superb save helped Bristol City earn a vital point in their battle for survival in the Championship.

The ex-Manchester United goalkeeper kept out Kirk Broadfoot's header in a game of few chances at Bloomfield Road.

His superb stop helped the Robins move within two points of safety despite falling to the foot of the table.

Blackpool, who are 16th, could not find the breakthrough and have not scored in the three games since as manager on 18 February.

Paul Anderson was next to threaten but the former Liverpool winger fired just over the bar after being found by Stephen Pearson.

At the other end Tom Ince tested Heaton and Matt Derbyshire volleyed wide from 12 yards on the stroke of half-time.

It was City doing all the pushing after half-time and after heading straight at Matt Gilks, Steven Davies had the ball in the net but he was flagged for offside.

A minute later Heaton did brilliantly to keep out Broadfoot's header from a Tom Ince corner and City held on for the point.

"We are trying a style of play that suits us but we are finding it very frustrating on that pitch.

"We are adapting and changing the way we play at home which is wrong. It's a leveller, that pitch. It's frustrating for our players who want to get out and try and trust themselves with it.

"You try and play in the right areas, but the players have to sometimes take two touches instead of one. It's wrong that we've got a fantastic passing team and we're struggling to flow at Bloomfield Road."

"I thought we were consistent from the first whistle to the last and in the Championship that's quite difficult.

"The most important moments of the game were a corner and a throw. The rest of it you could probably forget."