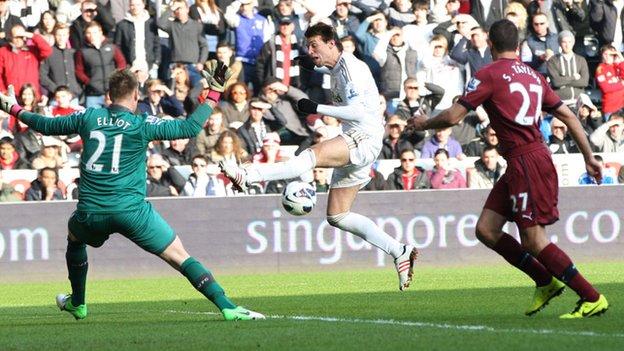 The win takes Swansea to 40 points but they had to survive sustained pressure from the visiting side.

Newcastle hit the crossbar and forced a series of saves from goalkeeper Michel Vorm in the second half.

Newcastle might feel aggrieved at the result, especially after a second half in which they looked the stronger side.

In fact, before Moore's late intervention, it had taken a finger tip save by goalkeeper Michel Vorm from Yohan Cabaye's fierce shot to keep the home team level.

Fellow Frenchman Moussa Sissoko also proved a handful for the Swansea defence, but Laudrup's team showed some steel to go with the style for which they are renowned.

The Swans had the Capital One Cup on display by the side of the pitch for inspiration but made a shaky start even so, with Garry Monk almost caught out at the back for the hosts.

But with Angel Rangel causing problems down the right-hand side, they soon had chances with Michu heading over from close range and then Steven Taylor having to clear Ashley Williams's close-range effort off the line.

The defender should really have scored after Michu had touched the ball past goalkeeper Rob Elliott from Jonathan de Guzman's free-kick.

Newcastle harried Swansea, their physical approach earning bookings for Cabaye and Cheick Tiote, the latter rather unluckily as he clearly did not make contact with with Nathan Dyer.

Monk headed over from eight yards from another De Guzman free-kick as Swansea continued to have the better chances, but they could not find the breakthrough before the interval.

The home team again almost took the lead in the opening minutes of the second half, but were denied by a fine double save from Rob Elliott, the Magpies keeper palming Rangel's shot away and managing to keep out De Guzman's follow-up as well.

Newcastle enjoyed their best period in the second half, though first Papiss Cisse and then Yoan Gouffran failed to test Vorm.

But the goalkeeper had to be on his mettle when he touched Cabaye's shot onto the crossbar.

Vorm was suddenly the busiest player on the field, turning around a swerving long-range effort by Sissoko.

But the breakthrough came at the other end, as Wayne Routledge's cross deflected off Mapou Yanga-Mbiwa into Moore's path, and his shot found its way into the corner via a deflection off Cabaye.

"Second half they came out they put us under pressure, they had a couple of good chances or three.

"Michel Vorm had a couple of very good saves, so at that point it looked as though they were going to maybe score the goal and win the game, and then we scored."

"We are frustrated and disappointed we did not even get a draw as we more than deserved that.

"We sat off them for the first 20 minutes of the first half but we sorted that at half-time. In the second half I thought they had settled for a draw, they knew they were doing well to stay in it.

"But when we did not score in that great period we had you know any mistake can be costly and that is what happened.

"We missed two or three big chances and you cannot do that at this level. The goal was sloppy, it's a ball into the box, we had four defenders there and it should have been dealt with better, unfortunately it wasn't and it cost us."