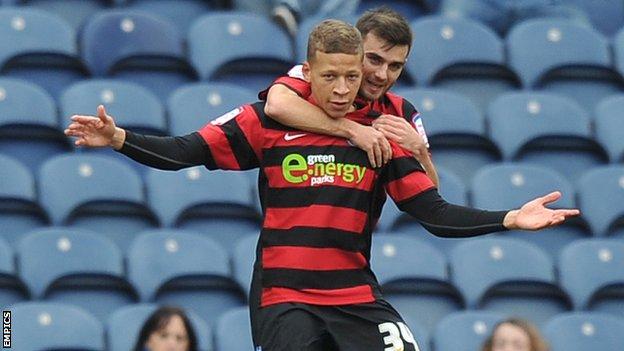 Gayle opened the scoring after pouncing on a rebound from Danny Swanson's shot, then added a second with a header.

Jordan Rhodes found space to fire home for Blackburn with 17 minutes left and David Jones scored from 20 yards in the last minute but there was no equaliser.

Two seasons ago, Gayle was playing for Stansted in the ninth tier of English football. He joined League Two Dagenham & Redbridge in 2011, but they immediately loaned him out to Bishop's Stortford in the Blue Square Bet North, where he scored 42 goals last season.

He only made his Football League debut in August for the Daggers before joining Posh in November, initially on loan.

The forward opened the scoring within 11 minutes at Ewood Park when Kean denied Swanson with a double save, Gayle smashing home the rebound.

DJ Campbell was denied an equaliser by Robert Olejnik and moments later it was 2-0 when Gayle headed home after defender Karim Rekik failed to deal with Nathaniel Mendez-Laing's cross.

And he had his hat-trick sewn up before the half-hour mark when Mendez-Laing cut the ball back for Tomlin to shoot and Kean's save landed with Gayle, who lifted the ball over the goalkeeper.

Rhodes missed a good chance to pull one back and Posh could have led 4-0 at half-time as Swanson drove just wide.

The hosts were better in possession after the break though Posh might still have increased their lead but for Rekik's fine tackle to deny Mendez-Laing.

Michael Appleton's side finally broke through in the 73rd minute when Rhodes nutmegged Michael Bostwick before firing home.

Jason Lowe squandered a chance to reduce the deficit, and when debutant Jones, one of the half-time substitutes, did so from outside the box it was too late for a Rovers comeback.

"They [the players] should feel let down themselves. They should be disappointed in themselves but that's the issue. Are they disappointed? Are they genuinely gutted at the fact that they've come in at half-time 3-0 down?

"Does it hurt them that much? There's certainly a lot of players in that dressing room that are hurting at the minute but I'm not convinced it's all of them.

"That brings a problem and it'll go either one way or the other. They know exactly which way it'll go from my point of view because they've been told. I think if the rules allowed me to make six or seven subs, I would have done."

"He's a very good player. He's better than I thought he would be.

"He's technical, doesn't give the ball away, and makes clever runs. He's the real deal. He will score goals. I thought him and (Nathaniel) Mendez were a real threat today.

"I don't know if we should have been hanging on as it doesn't justify our performance in the first half, which was outstanding. To come here and be 3-0 up, and it could have been more. I thought my players were outstanding."