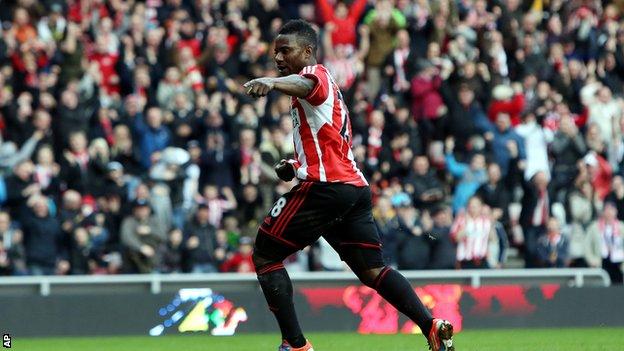 Sunderland rallied from two goals down to draw with Fulham and end a three-match losing run.

Dimitar Berbatov scored a penalty to make it 1-0 after Craig Gardner felled Ashkan Dejagah and Sascha Riether added a second from a counter-attack.

Gardner pulled one back from the spot after Philippe Senderos tugged Danny Graham's shirt.

The result takes Fulham into the top half, nine points above the drop zone, while Sunderland are now six points clear of the bottom three - and without a win in five games.

Sunderland had not scored at home in a month and a half but they almost ended that streak within 60 seconds as John O'Shea headed Adam Johnson's corner into the side netting.

Fulham had barely had a chance at goal before they won their penalty to open the scoring. Dejagah went down easily after a tackle by Gardner and Berbatov calmly and coolly just passed the ball into the corner, leaving Mignolet rooted to the spot.

Dejagah has caught the eye this season for the Cottagers following his summer move from Wolfsburg and should have doubled their lead when he latched onto an enormous Mark Schwarzer kick down the field but flashed his shot wide of the goal.

However the Londoners did find a second and Dejagah had a major hand in it. Berbatov headed clear a Sunderland corner, the Iran midfielder took the ball on and played it out to Bryan Ruiz, who in turn played the ball back to Dejagah. His shot was parried by Mignolet into Riether's path six yards from goal and the German, on loan from Cologne, tapped into an empty net for his first goal in English football.

But within three minutes, Sunderland ended their home goal-scoring drought when Senderos tugged Graham's jersey in the box and Gardner blasted the penalty into the top-right corner.

And having created little up to that stage, the goal seemed to spark them into life - the lively Sessegnon taking on three players with pace and skill and forcing a save from Schwarzer, before Gardner skewed a shot over from 25 yards.

Graham was making his first start at the Stadium of Light following his £5m move from Swansea and early in the second half he should have pulled his side level when the ball broke to him 10 yards out but Schwarzer was able to easily keep out his shot.

Sunderland midfielder Alfred N'Diaye was growing in stature as the game went on and blazed a shot high and wide before heading over Gardner's cross.

However it was from the next chance that the game was decided. Bryan Ruiz's brilliant scooped ball landed to Berbatov in the box but he was denied by Mignolet's feet and Sessegnon led the counter-attack, which he finished from 18 yards out after Adam Johnson's ball broke to him in the box.

Sunderland were in the ascendancy by this stage and looked the more likely to win but Fulham held on to go 10th in the table.

"I thought we could have won the game. From 2-0 behind, it's a big point. But we put relentless pressure on once we got back to 2-2.

"There was an incident towards the end when one of their players handled the ball and the referee has not given a penalty. I'm pretty disappointed. They have a difficult job but he was in the spot to give the early penalty against us.

"I thought he was going to book their player for diving but he gave the penalty.

"You can talk about luck and in the last few games, we shouldn't have lost any of them. I thought we deserved to win this.

"Simon Mignolet's save was a big moment in the game, it could have gone 3-1. He has been fantastic for us this year."

"In hindsight we controlled the first half. Of course the penalty situation changed the course of the game. After that Sunderland smelt blood and had their confidence back. But I still feel it wasn't a penalty kick. If you give that, you have to give four or five in every game.

"Don't forget, we should have made it 3-1 and put it to bed. We did ever so well in the first half, we controlled the game and dominated them. I'm not happy with one point.

"We were the better team, it should have been a win. All these teams look behind them (in the table), everyone could be dragged into it."