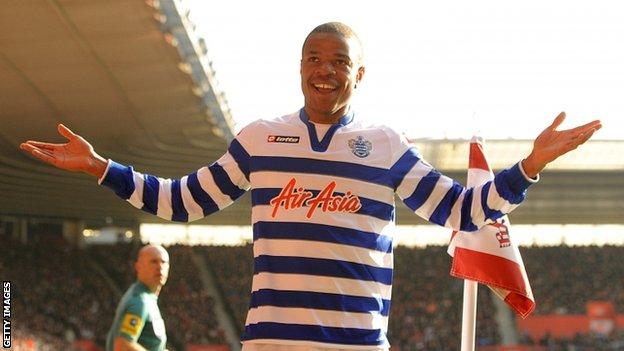 Jay Bothroyd scored a late winner to boost Queens Park Rangers' hopes of staying up and deal a blow to Southampton's own survival prospects.

QPR took the lead against the run of play when Loic Remy finished clinically from Junior Hoilett's lofted pass.

Southampton equalised through Gaston Ramirez, who followed up Julio Cesar's save and chipped the goalkeeper.

But QPR snatched only their third win of the season as Bothroyd turned in a low cross from Park Ji-sung.

In a tense finale, a late corner almost brought about an equaliser for Southampton, but Maya Yoshida's header was brilliantly saved one-handed by substitute goalkeeper Robert Green, who had only just replaced the injured Brazilian Cesar.

Six minutes of injury-time followed before bottom club QPR were able to celebrate a crucial win which moved them to within four points of safety, and left the Saints just three points above the relegation zone.

QPR boss Harry Redknapp punched the air in delight at the conclusion of a difficult afternoon in which he was booed throughout on his first return to Southampton since he sparked fury among the fans by leaving to rejoin arch-rivals Portsmouth seven months after relegation.

The outcome also justified his decision to drop Adel Taarabt and field a new-look strike force, with the recalled Remy, Bothroyd and Hoilett all playing decisive roles.

After being greeted by a chorus of boos as he emerged from the tunnel, the opening exchanges of the match did little to lighten Redknapp's mood as QPR struggled to cope with the home side's pace and movement.

Adam Lallana and Jack Cork both went near from long range, while Jason Puncheon had an appeal for a penalty turned down by referee Howard Webb.

But the momentum shifted as Hoilett and Remy combined to give QPR the lead from their first attack.

Hoilett's pass caught the Saints' defence on the turn and Remy sprinted clear to beat Artur Boruc with a crisp finish, which the retreating Danny Fox narrowly failed to clear off the line.

The goal seemed to energise QPR, who enjoyed a period of control, with Remy a constant threat on the right flank.

A physical encounter claimed its first victim when Saints captain Lallana was forced to leave the field after a collision with Clint Hill, but his replacement Rodriguez provided the spark the home side needed.

His low strike from the edge of the box was parried by Cesar straight into the path of Ramirez, who clipped a sublime finish over the QPR keeper.

"What a result for QPR and what a birthday present for Harry Redknapp. The QPR manager's relief was clear at the final whistle after Bothroyd delivered only their third win in 28 Premier League games."

There was still time for QPR to fashion a chance before half-time as Bothroyd latched on to a loose ball inside the box, but could not find the target with his left-footed drive.

Southampton went on the offensive after the restart with centre-back Jose Fonte firing wide before Rodriguez curled a delightful effort on to the roof of the net.

The right wing remained QPR's most profitable avenue and it was from there that they carved out what proved to be the winning goal.

Park slid in to dispossess left-back Yoshida and crossed from the byeline to Bothroyd, who tapped home his first Premier League goal of the season.

With five minutes on the clock, Yoshida had a golden chance to make amends for his error, rising highest to meet James Ward-Prowse's header.

But Green - brought on in the 73rd minute when Cesar limped off with a thigh injury - pulled off a superb save to keep QPR's slender hopes of beating the drop alive.

"We didn't expect this result but we have to accept it because we have made some mistakes.

"We've tried very hard and put in a great effort to get a different result but because of errors and their keeper's intervention we didn't get a positive result."

"I have confidence in my team, but we need to keep on working for this result and prepare the next game against Norwich."

"It was a big result for us, this is a difficult place to come and Southampton are a good team.

"I picked 11 players to work hard and when you work hard you get your rewards.

I don't see Southampton getting sucked into a relegation battle. They are a good side."